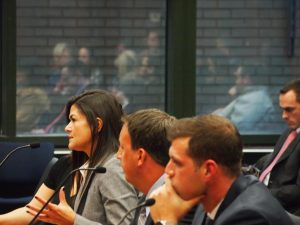 Joline Rivera talks to members of a joint state House and Senate panel about her magazine, “Kitchen Toke,” a publication that focuses on the use of marijuana in food preparation. Rivera was part of a panel of ancillary businesses benefiting from medical marijuana being legal in Illinois as state lawmakers look at the possibility of legalizing marijuana for recreational use in Illinois. On the recent panel with Rivera were Jeff Livesay (center), a Champaign CPA, and Robert McCarthy, distribution manager for a cryogenic gas business in Elgin. (By Kevin Beese/Chronicle Media)

Jeff Livesay never envisioned being in the marijuana business.

The Champaign CPA had worked with large agricultural clients with greenhouse crops for more than 20 years, but when medical marijuana became legal in Illinois in 2015 he began getting calls and referrals for financial statements, investor reports and other required financial documents for marijuana cultivators.

“I wasn’t sure I wanted to be in the industry. I didn’t see myself in the industry,” said the certified public accountant with Martin Hood LLC, “but due to a long due-diligence process what I found was those that were involved (in marijuana cultivation) were probably cleaner than most of the other clients I’ve had in the past 20 years because they know the eyes are upon them, that they need to be transparent, compliant.”

“They are going above and beyond in the transparency,” Livesay said.

He said pot growers have had a big impact on his accounting firm, generating additional hires and the need for additional space.

Livesay said he sees other clients, such as manufacturing companies, suppliers and security companies, that have benefited tremendously from medical marijuana growers.

Illinois lawmakers are examining the potential legalization of marijuana for recreational use, following Colorado, Washington and other states that have legalized pot. Livesay was part of a recent panel looking at the potential impact that legalized marijuana could have on ancillary businesses in Illinois.

Related: High times in Colorado — thanks, in part, to pot

The industry is not without its hurdles, he said, most notably, the banking regulations and the stigma involved with growing pot.

“The stigma — we got over that hurdle at our own firm with the due-diligence process,” Livesay said last  month before a joint state House and Senate panel examining the economic impact of legalized marijuana. “Obviously, there is a lot of growth to be had in Illinois. You’ve got to be careful. With any new industry, there’s smart money and there’s not-so-smart money. … I’ve been extremely happy with my clients and they’re some of the cleanest ones I’ve worked with.”

Robert McCarthy said his family’s cryogenic gas distribution business in Elgin had concerns similar to Livesay about getting involved with medical marijuana suppliers.

“With it being a pilot program, we were not sure how stable the market was going to be,” the distribution manager for MacCarb Inc. said. “It was a large capital investment for us to make as a small family business and with the longevity of this we didn’t know if it was something we wanted to get into.”

Distributing gases like carbon dioxide, hydrogen and nitrogen, MacCarb would like more of a long-term commitment and reassurance from federal and state officials that the company is on the right track in making capital investments to serve pot cultivators, McCarthy said.

Also like Livesay, McCarthy said his company had concerns about its image possibly being tarnished if things did not go well with supplying marijuana growers with gases.

“Seeing the regulations applied to it and the professionalism handled by the operation we are dealing with, we felt comfortable engaging in it,” McCarthy noted. “We have not had one bad experience so far working with the cultivation center.”

He said the entire new market helped diversify MacCarb’s customer base. In speaking with peers in Colorado, McCarthy said, he has heard nothing but positives about working with marijuana growers.

Having more approved cultivation centers, should recreational use of marijuana be approved in Illinois, would mean that more higher-paying positions related to cryogenic gases would be available in the state, McCarthy said.

Elizabeth Ervin and Joline Rivera are two Chicago-area residents who, in November, launched “Kitchen Toke,” a magazine that focuses on using marijuana in food preparation.

“Kitchen Toke is the first magazine of its kind,” Ervin said. “It is the definitive resource for cooking with cannabis. When I say ‘cooking with cannabis,’ automatically I think people think ‘pot brownies, gummies, sugary treats,’ and what we are doing is we are presenting cannabis as a high-quality product that is able to be integrated into food in a more holistic way than just sweets.”

She said the idea for the quarterly magazine came from the word “cannabis” continuing to come up as she and Rivera talked with chefs for a restaurant industry publication they also produce. Ervin said there has been a migration of chefs over to the cannabis area for their creations for recreational, supper club-type dinners.

“There’s a new consumer emerging in the cannabis space. The age range is kind of widespread, 35 to 65 years old, and they are seeking out a higher level, a more-sophisticated experience with cannabis,” Ervin said.

Rivera said she is regularly approached by suburban moms intrigued with the magazine’s concept.

“I have been approached more by soccer moms at our children’s events — soccer, volleyball, basketball, you name it — in suburbs like Schaumburg, Bolingbrook, Downers Grove, Plainfield, than anyone in the city asking for the magazine.”

Rivera said right now content for the magazine is being produced by people in the states where marijuana is legal. She said those are jobs that could be handled by Illinois residents if pot were legalized in the state.