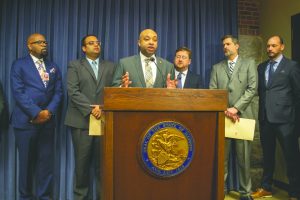 Rep. Justin Slaughter, a Chicago Democrat, is joined by environmental and union advocates Wednesday at the Capitol in Springfield as he introduces legislation to establish a Clean Water Workforce Pipeline. The program is aimed at increasing the construction workforce and bringing projects to neglected communities and populations, while updating the state’s water infrastructure.  (Photo by Jerry Nowicki/Capitol News Illinois)

SPRINGFIELD — A coalition of environmental groups, lawmakers and employee unions will seek $1 billion or more in funding from a potential capital bill this year to update the state’s aging water infrastructure.

Discussions of the state’s first capital projects bill in 10 years are in a fledgling state, and the list of requests for infrastructure improvements to roads, bridges, state-owned college and university buildings, and other deferred maintenance projects has been seemingly endless since new Gov. J.B. Pritzker took office.

But the advocates taking part in a Clean Water Workforce Pipeline news conference Wednesday at the Statehouse said the fundamental importance of clean drinking water earns their initiative a spot near the top of the infrastructure list in importance.

“The best and healthiest and the most affordable drink that we all should have access to is a cool, clear drink of water straight from the taps in our homes,” said Jack Darin, director of the Sierra Club Illinois Chapter. “But to make that glass of water safe and accessible to everyone, which everyone deserves, takes a lot of work.”

Slaughter said Illinois received a C-minus grade for wastewater and drinking water infrastructure from a 2018 study by the American Society of Civil Engineers. He added Illinois accounts for 25 percent of all lead service lines still in use in the U.S.

While Darin said the capital needs for revamping water infrastructure are in the “tens of billions,” the initial ask for this year would be closer to $1 billion.

“We think that a minimum of a billion dollars is needed to get started on some of these serious problems like wastewater, like lead contamination,” Darin said.

Part of that funding would be used to provide training and resources for careers in water infrastructure, with a goal of training 2,500 residents of economically and socially disadvantaged communities, those returning from the criminal justice system, foster care alumni, and women and transgender persons on an annual basis.

Community groups or other institutions demonstrating recruitment and training abilities would apply for funding to the Department of Commerce and Economic Opportunity under the program. Once funded, the groups would pass along grant money to people in the target categories in the form of various trainings and other programs to help remove road blocks to entry into apprenticeship programs.

“This is a solution that serves everyone, especially communities who have been overlooked too often when it comes to infrastructure projects and economic opportunity,” Slaughter said.

Sean Stott, executive director of the construction employee union LiUNA, said the bill would act as a pipeline to get more people involved in apprenticeship programs for water infrastructure, particularly downstate. This would include financial assistance for on-the-job training and classroom learning.

He said the apprenticeship programs would include “good wages,” health insurance benefits and retirement benefits.

Another goal is to “empower Illinois communities to install and upgrade vital water infrastructure,” per a news release.

“We envision the great majority of funds going for the projects needed to solve those (infrastructure) problems,” Darin said. “But we take a little bit of those funds to make sure we have the workforce to actually do the work and to make sure it’s representative of the state of Illinois.”

Slaughter said the coalition would look for various sources of funding as discussions for a capital bill continue at the Capitol.

“We will be fighting very hard to get the funding for this initiative,” he said. “Whether that is capital bill money, infrastructure bond money or any sort of effort that will come up with creative funding to get this off the ground.”