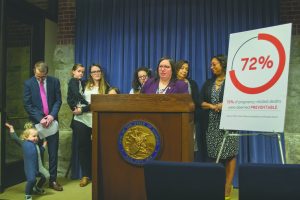 SPRINGFIELD — Deaths among pregnant and recently pregnant women have been on the rise in the U.S. for more than a decade, and a group of state lawmakers has introduced legislation aimed at reversing this trend in Illinois.

“We’ve done a great job (in the U.S.) focusing on the child, but when it comes to the mothers, we haven’t,” state Sen Cristina Castro (D-Elgin) said March 13 at a news conference. “I think that’s kind of fallen behind as a country. If you look at other developed countries, they do better than us.”

Per the report, African-American women were six times more likely to die of a pregnancy-related condition during that span. 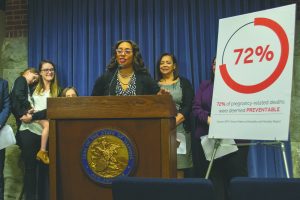 Hutchinson and Castro have introduced reforms focused on these issues, including Senate Bill 1909, which would continue Medicaid coverage for new mothers for 12 months after giving birth – currently a mother is covered for only 60 days after a birth.

“Just because the pregnancy goes smoothly doesn’t mean the mother won’t have complications afterward,” Castro said. “We are careful to examine newborns and their progress after birth, so why shouldn’t we do the same for mothers?”

Hutchinson’s Senate Bill 132 would require continuing education programs to teach doctors and nurses about implicit bias that can affect behaviors, decisions and actions in the treatment of women and minority groups.

“We’re finding too often and in too many cases that this does not just come down to whether or not you have insurance or whether you are comfortable going to a hospital,” Hutchinson said. “There are all kinds of cultural things that happen in that interaction amongst health care providers and patients from a number of different perspectives that impede and impact the kind and quality of care you get.”

Hutchinson said the type of care provided often depends on “how people view each other” during those interactions.

“There’s very few other things you could say in the highly industrialized nation that we live in, one of the richest countries on Earth, where these rates are the only places where they’re going up,” she said.

State Sen. Iris Martinez, a Chicago Democrat, said she would be exploring legislation focusing on making home births safer for those who either choose not to give birth at a hospital or do not have access to one.

Her Senate Joint Resolution 14, which passed in the Senate March 13, would create a home birth crisis committee to provide the General Assembly with evidence-based solutions to the Illinois home birth maternity care crisis.

Martinez said state home births increased by 50 percent from 2007 to 2014, but there are now fewer than 10 legally recognized home birth nurse midwifes in Illinois.

“Due to this scarcity, approximately half of the babies born at home in Illinois are born with no skilled assistant, or with assistance of underground community midwives who may or may not be licensed or credentialed,” Martinez said. “If a midwife is not licensed, they will not have access to lifesaving oxygen and anti-hemorrhage medication.”

Martinez said 33 states license community midwives, and Illinois should join them, as many women cannot afford to have a baby in a hospital.