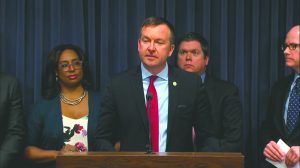 Mirroring fellow Democrat Pritzker’s rhetoric, the group framed the $3.2 billion structural deficit issue as having three solutions: 15 percent across-the-board cuts to all state budgets and programs, including education; a 20 percent income tax increase on every Illinoisan; or the graduated tax which they say lowers the tax rate for 97 percent of Illinoisans.

The cuts option, the group said, would lead to higher property taxes, cause 17,000 seniors to lose access to home-delivered meals, 2,300 women to be denied breast cancer screenings and treatment, 13,000 families to lose access to the early intervention program for children with disabilities, and 20,000 students to lose access to Monetary Award Program grants to continue their college education in Illinois.

According to the Illinois Board of Higher Education, 48.4 percent of Illinois public high school graduates enrolled in four-year universities in 2017 left the state to attend college. Democratic state Rep. Mike Zalewski of Riverside said cutting MAP grants would “accelerate the outmigration of our brightest students.”

Pritzker’s plan, the group said, would stabilize the state’s finances by raising $3.4 billion in new revenue, $2.7 billion of which will be paid by approximately 20,000 Illinoisans with single or jointly-filed incomes which exceed $1 million.

Those making between $250,001 and $1 million would provide the rest of the added revenue, while those with incomes below $250,000 – approximately 97 percent of Illinoisans, per Pritzker’s estimates – would see a lower effective rate than they do under the current flat tax rate of 4.95 percent.

The graduated tax would require a constitutional amendment backed by three-fifths of the General Assembly and voters in November 2020. If it passes, it would give the Legislature the authority to set a graduated rate instead of a flat rate, but it would not determine specific rates.

Opponents have said giving the Legislature this authority puts too much “trust” in state government.

But Oak Park state Sen. Don Harmon called that argument a “head fake,” noting the amendment will not give the Legislature any tax-raising authority it doesn’t already have – it would simply allow the rate to be higher on wealthier Illinoisans.

“It’s really hard to vote to raise income taxes, no matter what the circumstance. How many times have we done it in the last 25 years? Twice?” Harmon said. “It’s a really difficult thing to do. It’s not going to be any easier with a fair tax authorized in the Constitution.”

The Democrats argued Thursday that a spike to a 6.95 percent rate on every Illinoisan would be necessary to avoid the 15 percent across-the-board cuts should the graduated tax amendment not pass.

Despite those warnings, elected Republicans have thus far remained unanimously opposed to the graduated tax.

“We’ve raised taxes twice in the last decade, we haven’t made other changes to the way this state operates, and we find ourselves continuing to feel the pressure of growing expenditures and insufficient revenue,” Republican Deputy Minority Leader Tom Demmer told Capitol News Illinois earlier this month.

Demmer, of Dixon, said his caucus would prefer to talk about the current budget year, rather than the graduated tax which wouldn’t produce revenue until 2021 at the earliest.

“Unless we want to get together and seriously talk about what are some ways we can make Illinois’ economy more resilient and add jobs to the state, and we can bring people back to the state of Illinois, unless we’re ready to do that, it’s a real problem,” he said.” Simply going back to another tax increase alone is not going to solve our issue.”

But state Sen. Andy Manar, a Bunker Hill Democrat who chairs an appropriations committee in the Senate, said opponents of the plan need to drop the “rhetoric” and “put their votes behind” specific cuts if they want them to be part of negotiations.

“If anyone believes that a 15 percent across-the-board reduction to state spending is the appropriate way to move forward, I would challenge them to file that budget in the House and the Senate so we can make that part of the debate moving forward,” Manar said.