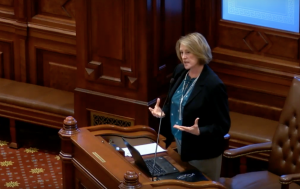 State Sen. Christine Radogno (R-Lemont) appeals to her colleagues to move forward on the ‘grand bargain’ budget bills March 1. The Senate adjourned without calling a vote on seven out of 12 bills. (Blueroomstream.com)

The Illinois State Senate’s “grand bargain” budget bills sputtered out March 1 when senate leaders refused to call seven of the 12-bill package meant to hammer out a budget for the state. Democrats pointed the finger at Republican Gov. Bruce Rauner.

“Unfortunately, I’ve been informed that the governor has decided to interject himself in this process,” Senate Democrat Leader John Cullerton (D-Chicago) said from the Senate floor. “I’m told any votes on this bipartisan plan would reflect that.”

Rauner presented his version of a $37.3 billion budget proposal Feb. 15, after a budget address that was met with snickers from Democrat lawmakers who posted signs at their seats calling Rauner’s budget “fake news” and “alternative facts.”

After Cullerton’s announcement, Senate GOP minority leader Christine Radogno (R-Lemont), who worked with Cullerton to craft the bill package, said, “this has been one of the most frustrating, yet rewarding experiences in the 20 years I’ve been here.”

The “grand bargain” bill package was a first step to creating a budget plan for the state that offset increased revenues from income taxes and new casinos with “reforms” such as workman’s compensation tweaks and term limits for General Assembly leaders. The bills were tied together in an all-or-nothing suite meant to be presented to the House and then the Governor.

“This state is suffering so badly right now, and I know how many of us in this chamber want us to get the budget together so that we can move forward,” Radogno said.

Later, at a press conference, Cullerton implied Rauner had given marching orders to GOP lawmakers to vote down the bill package. Sen. Don Harmon (D-Oak Park) told Crain’s Chicago Business that Rauner called several GOP lawmakers into conferences and advised them to vote against the bill.

“This entire budget package is a weak charade meant to convince Republicans to provide Democrats cover on yet another tax increase. Don’t take the bait. Stand up for the people and vote against any proposal that forces Illinoisans to pay more before the state enacts real reform,” Tillman wrote. “This is not a reform package. Lawmakers must vote no.”

Rauner’s Spokesperson Catherine Kelly issued a statement that did not specify whether Rauner advised lawmakers to dump the bills.

“We appreciate the hard work of the Senate in trying to pass a bipartisan agreement that can become law. Some progress has been made, but more work is needed to achieve a good deal for taxpayers. We encourage senators to keep working toward a good deal for taxpayers,” Kelly said. Chronicle Media’s attempts to contact Kelly for a follow-up were unsuccessful.

“The governor doesn’t want to compromise,” Cullerton said Wednesday, after the Senate had adjourned.  “We can come up with a compromise. The compromise is there. The governor’s got to realize this is as good as it’s going to get. We’ve been compromising for a month with Senate Republicans,” he added.  “[Rauner’s] willing to compromise as long as he gets 100 percent of what he wants, apparently. That’s not how it works. He’s never been a governor before and never been in government.”

Cullerton took a dig at Rauner’s Turnaround Agenda, which the governor has not managed to move forward. Cullerton said Rauner was off the mark when he insisted “job creators” were staying away from Illinois because of punishing workman’s compensation laws.

“It’s hard to say Illinois is not competitive because of our workers’ comp laws and we’re losing jobs and all that because of our workers’ comp laws,” Cullerton said. “The reason why we might be hurting is because we don’t have a budget, because we’ve been downgraded [by bond-rating agencies]. The image of the state as one of the worst-run and the only state without a budget, — that’s what’s hurting the jobs climate and the business climate.”

The General Assembly will reconvene March 7.