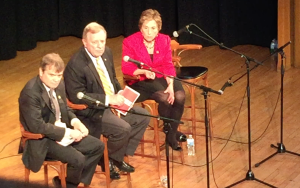 Although some Republicans have complained about boisterous, confrontational town hall forums, an April 17 town hall for the Illinois 5th Congressional District was more like a Love-In.

Russians, Healthcare and Immigration were the topics chosen to be discussed. Volunteers from the 5th District “Indivisible” group organized the event, collecting a handful of questions from more than 700 emails, the group members told the crowd. Audience members flapped their green “Agree” signs for much of the event, but

red “Disagree” signs popped up when they were told anyone drinking alcohol had to leave the auditorium to watch the livestream in the nearby pub.

Quigley, who serves on the bi-partisan House Permanent Select Committee on Intelligence, had just returned from a trip to Cypress, where Paul Manafort, an early adviser to the Trump campaign, allegedly had Russian-linked bank accounts, according to the New York Times.

All three Democrats agreed an independent prosecutor and commission was what they preferred to investigate the Russian connection to the 2016 elections. One reason was that any investigation by the Intelligence Committee would remain closed to the public.

“We have to make sure we get the truth no matter what that truth turns out to be,” Quigley said. “Public pressure is working, it’s had an effect already.”

He noted that the Democrats did not want to be seen in a similar light to the Republican House committee members who questioned Hillary Clinton in 13 hearings about the American servicemen deaths at Benghazi in 2012.

The three Dems agreed that public pressure in the form of phone calls, emails and other communications from thousands of constituents was what gave Republicans cold feet about repealing the Affordable Care Act. 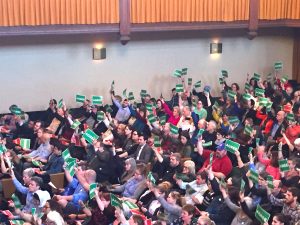 The economic toll if the ACA was repealed would be heavily felt in places like central and southern Illinois, said Durbin, where small hospitals would likely be put out of business. “A hospital is a big deal in these rural downstate towns,” Durbin said. “Not only is there medical care, but it’s the biggest employer in town with good jobs.” Republican congress members were unlikely to want to cause these local hospitals to go under, he said.  “[The Republicans] couldn’t call the vote [on the ACA], because millions of people got involved on that one issue,” Durbin said. The United States could not go back to the “bad old days” where people died because they had no insurance, he said.

An audience member asked whether now was the time to push for single-payer health insurance or “Medicare for all.”

Quigley said he was following the lead of House Minority Leader Nancy Pelosi and trying to keep the Republicans from eliminating funding from the provisions of ACA.

“When we get there, we’ll get there and we’ll all be together,” he said.

The only heckle of the evening greeted this remark from a woman who yelled “I’m not buying it Mike!” and stormed out of the auditorium.

When the topic turned to immigration, a woman identified herself as an undocumented immigrant and mother of U.S. citizen-children.

“I’m a productive member of society, but every day I wake up with fear in my heart at the thought of being taken away from my family,” she said. She worried that members of Congress and the Trump administration were working to “criminalize me and people like me.”

Durbin sponsored the first DREAM Act legislation in 2000, which would help young people who came to the United States under age 16 obtain a temporary allowing them to attend university and work. Durbin said the act was co-sponsored by Republican Senator Lindsey Graham (R-South Carolina) who ran against Trump in the GOP primary. Durbin said this was an example of how Democrats and Republicans could find common ground.

The DREAM act never passed. Durbin said former President Barack Obama spent most of his personal pre-inauguration meeting with Trump warning him not to destroy the DACA (Deferred Action for Childhood Arrivals) program, since so many young people came forward voluntarily to sign up.

“They risked so much to come forward,” he said. “[Obama] said you’re a fool if you take this on,” Durbin related. “We’ve got to keep immigration reform on the front burner, even though we’re in the minority,” Durbin added.

Schakowsky was more fired up.

“I just want to tell you, I am willing to do whatever it takes to stop this — and that includes civil disobedience; it wouldn’t be the first time,” said the 77-year old congresswoman. “We have to support sanctuary cities and to support our DREAMers. We have to be fierce in this battle. My parents fled Russia as children. I met children today fearful to go to school, fearful that their parents won’t be there when they get home. This is unacceptable in a country of immigrants, and we are going to fight.”

Durbin said he was willing to keep attending town halls, especially in Republican-controlled districts where GOP congress members would not meet with their constituents during the congressional recess.

“If these Republicans don’t want to meet the people they represent, I’d like to meet them,” he said.

Afterwards, a volunteer with a clipboard summarized what the politicians had said and announced that their positions would be posted to help hold them accountable.

The congress members left with encouraging words to the fired-up crowd.

“It’s not too early to think about 2018,” Schakowsky said “It’s not too soon to talk about voter registration. You can call us, you can call Democrats in other districts and keep driving these issues into the 2018 elections.”

“This is how you win elections,” Durbin said. “It’s here in the fact that you care enough to come out tonight.”