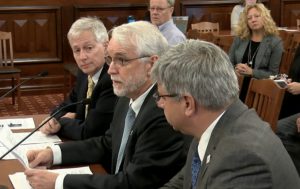 University of Illinois president Timothy Killeen (center) talks to state senators about the benefits of the proposed Discovery Partners Institute, an education, research and innovation institute with hubs around the state. He said the institute would make a mark on more than just academia. Flanking Killeen are Edward Seidel (farthest from camera), U of I’s vice president for economic development and innovation, and Bill Sanders, interim director of DPI. (BlueRoomStream.com)

A joint education, research and innovation institute is hoped to curb the exodus of higher-education students from Illinois.

Discovery Partners Institute is a $500 million effort led by the University of Illinois with hubs already announced in Chicago, Springfield and Urbana, connecting scholars and students. It will include a statewide innovation network, linking businesses and public universities.

“It will be the university of tomorrow by being very modern … They will educate thousands of students, Illinois natives and others, in leading-edge, hands-on curricula that will nurture the innovators and entrepreneurs of tomorrow,” University of Illinois president Timothy Killeen said during an Aug. 28 state Senate Higher Education Committee hearing on the planned institute.

“These forward-looking programs will help us keep our best and brightest students here at home, upstate and downstate, rural and urban, and help stem a recent outmigration which has seen more top students leave the state for college and then stay in other states after they graduate.”

Killeen said the project is for the common good, helping generations of students. He foresees the institute not just making academic breakthroughs, but also making a mark on health care, the environment, population growth, and food and agriculture development.

Hans Zigmund, director of the state’s Office of Budget and Management, said that funding for the Discovery Partners project would come from Build Illinois bond funds, which are financed through sales tax receipts.

He said while only $146 million is currently available in the Build Illinois fund, only 10 to 20 percent of the $500 million price tag will likely be needed in the project’s first year.

“It is the hope that we can not only start working through the planning and development, but I think there are some other things the university wants to do — vertical construction, for example,” Zigmund said.

Senators questioned whether the $3 billion in deferred maintenance projects at public universities would be impacted by the DPI project. Zigmund said that the deferred maintenance work and the Discovery Partners project are two separate funds and one would not affect the other. 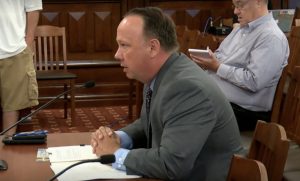 Hans Zigmund, director of the state’s Office of Budget and Management, tells state senators that money for the Discovery Partners Institute will come from Build Illinois funds, covered by sales tax receipts. (BlueRoomStream.com)

The director of the Office of Budget and Management added that there are 18 deferred maintenance projects for public universities, with an estimated cost of $57 million, which are ready to be bid out.

Killen said the U of I has yet to receive any money from the state for the Discovery Partners project.

“We will be working furiously to develop the grant application (for Build Illinois funds),” the university president said.

Bill Sanders, interim director of DPI, said he anticipates the first cohort of students to enter the institute in Fall 2019 and a campus facility up and running in Chicago’s South Loop by 2023.

Discovery Partners will also be linking with international partners, already signing on with Tel Aviv University in Israel.

State Sen. Scott Bennett (D-Champaign) expressed concerns that what was billed as a public-private partnership has only been a public endeavor so far.

“When are we going to be at the point that we go from ‘I can’t tell you yet. We’re really, really close’ to ‘We have big partners involved?’ When are we going to get to that point?” Bennett asked. “When the governor and the University of Illinois last October came (before us), we talked about it being a true public-private partnership. That has disappeared from this bill (proposing DPI funding). There’s not a matching element now.”

Edward Seidel, University of Illinois vice president for economic development and innovation, provided a gardening metaphor he used when growing an ivy patch. “First, it sleeps, then it creeps, then it leaps,” Seidel said. “That’s where we are: we’re passing from creeping into leaping; and, I’m telling you, you’re going to see lot of announcements.”

He said with the state’s allocation of $500 million to the project, company CEOs are ready to talk about being part of the partnership.

—- Education and innovation hubs being developed —-