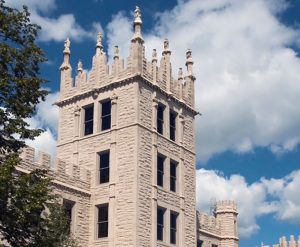 Early tabulations show enrollment is down by at least 6,600 n Illinois public universities in the 2016-17

Although precise figures haven’t yet been officially calculated by the Illinois Board of Higher Education, a rough count shows that at least 6,600 fewer students were enrolled in Illinois public universities in the 2016-17 school year than the previous year. Universities typically report enrollment numbers on the 10th day of classes.

Illinois state institutions were hit hard by the Springfield budget stalemate, which withheld millions of dollars for more than a year in needed state funds until a temporary “stop-gap” budget was passed at the end of June. Insecurity about financial aid and an increasing unease about the future of Illinois public institutions may have caused some students to leave the state this year. Universities in Iowa, Alabama and Wisconsin were said to be courting students with early decision and generous financial aid specifically targeting Illinois.

The student brain drain is not new this year. A New York Times analysis, published Aug. 26 showed that in the 2015-16 school year, 16,461 residents left Illinois for other states, while 2,117 students entered the state to attend public universities. A 2016 study by the Center on Budget Priorities blames state legislators who have been more stingy toward post-secondary education since the 2008 recession, while tuition has risen by 33 percent.

Embattled Chicago State University reported the largest percentage drop in enrollment, dropping to 3,578 total students, a 25 percent decline from the 2015 number of 4,767. Only 86 freshmen were registered at CSU this fall, down from 253 reported in 2014 (2015 numbers were not available on the university’s website.) The school was hardest hit by the budget stalemate, with 30 percent of the university’s general fund, or $36.3 million in state dollars withheld last year.

An additional budget hole of $5.5 million in MAP grant money was not paid in 2015-16. Students may have stayed away repulsed by years of conflict between faculty and administrators.

Faculty held a no-confidence vote for former president William Watson, but his replacement, Thomas Calhoun Jr., was dismissed by the board after nine months with no public explanation, collecting a $600,000 severance package, that many considered excessive. Gov. Bruce Rauner said in a Sept. 29 press conference he would look into replacing four board members in January 2017.

Eastern Illinois University in Charleston reported the second-largest drop in 2016-17 enrollment, losing 1,105 students, or 13 percent, to a total of 7,415 from 8,520. The university saw 25 percent fewer freshmen enroll bringing the number to 1,251 from 1,673. “Our state government is literally starving its public universities,” David Glassman, president of Eastern Illinois University in Charleston wrote in a public letter to students last year. One bright spot: Graduate student enrollment increased by 10 percent to 1,458 and the school attracted 433 international students, up almost 50 percent from 291 last year. Eastern has seen steady enrollment drops since 2008.

“While our numbers are down, the academic quality of our freshman class has increased,” he said in a press statement. “We have continued to focus on enrolling and supporting students who are ready for college success and can benefit from the excellent, hands-on education and support we provide as a research university.” The school had an enrollment of 24,869 students in 1991.

Southern Illinois University–Edwardsville fared better, with a drop of only 123 students (.9 percent) to 14,142 total enrolled. The number of freshmen at SIU-Edwardsville declined by 7.7 percent, however to 1,935.

Western Illinois University saw a 6.5 percent drop in enrollment to 10,373 from 11,094, according to the school. WIU did not lose freshmen between 2015-16, said President Jack Thomas. WIU enrollment has dropped by 15 percent overall since 2009. Thomas said stabilizing enrollment was a priority to keep the school affordable.

“Our vision remains to be the leader in quality, opportunity and affordability among regional universities. We will continue to be an outstanding regional university serving our students and our state (and beyond),” said WIU President Jack Thomas. “Our priorities for this academic year, and in the coming years, include stabilizing our enrollment, further increasing retention and providing academic programs that are responsive to our students’ and society’s needs.”

Northern Illinois University in DeKalb saw an enrollment drop of 5.5 percent to 19,015 from 20,130 last year. More troubling was a 20 percent drop in enrolling freshman to 1,802.

“We are clearly not where we need to be,” wrote President Doug Baker in a letter to the university community. Baker said keeping tuition charges flat and recruiting transfer students were proactive ways the university was trying to get back on “a growth trajectory.”

Northeastern Illinois University saw a 3.5 percent drop in overall enrollment to 19,015 from 20,130 in 2015. But the school had a robust growth of 22 percent more enrolling freshmen this year. This could be because of a new dormitory, the university’s first, that attracted students who wanted to live on campus.

Governors State University’s 2016 enrollment dropped by 121 students (or 2 percent) to 5,818 from 5,939 in 2015. Freshman numbers were not provided on the school website, but the 2015 incoming freshman class of only 203 students, about 3 percent of the school’s total enrollment — shows the school may be struggling to attract freshmen.

University of Illinois at Champaign-Urbana was the only school to release 2015 enrollment numbers different than those reported by the Illinois Board of Higher Education data. According to U of I’s press statements, enrollment in 2015 was 44,087, which meant a slight increase in 2016 enrollment to 44,087. But according to the IBHE, U of I’s enrollment numbers in 2015 were 45,842, which equals a 2 percent drop. It was unclear why this discrepancy existed. The university, which has been criticized for favoring international students — with their high international tuition rates — admitted 1,000 more Illinois residents, this year, according to a statement.

Illinois State University in Normal showed the highest enrollment increase, and that was only a 1 percent increase to 21,029 from 20,807 in 2015. ISU’s freshmen enrollment held steady at 3,638.