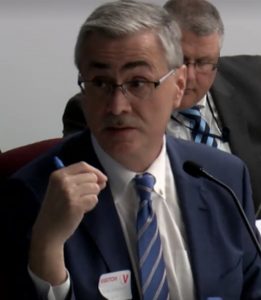 Ralph Matire, executive director of the Center for Tax and Budget Accountability, says the state’s new school-funding formula is helping to get funds to financially strapped school districts. (Blueroomstream.com)

Despite a new, highly touted school-funding formula in place, a huge gap between the haves and the have-nots still exists.

“There are equity issues within the state,” Robert Wolfe, chief financial officer for the Illinois State Board of Education, told the first gathering of the Evidence-Based Funding Professional Review Panel held in late June. “There are some districts with half of what they need; and some districts have almost three times what they need.”

Tony Smith, state superintendent of education, noted that 32 cost factors have been codified into law as to what constitutes adequate education.

Ralph Matire, executive director of the Center for Tax and Budget Accountability, said that a huge discrepancy does still exist between school districts’ funding levels.

“So many districts remain so significantly underfunded in this state that going to the greater route and allowing them the flexibility to allocate their resources to items that make the most sense in their communities is really the better way to go,” Matire told his peers on the panel.

While there are flaws in the state’s new school-funding formula, which was passed last year, Matire said, the new system has helped strapped districts.

He said $130 million of $366 million in additional funding provided for the most cash-strapped districts in the state went to the 5 percent of districts furthest from funding adequacy.

“If you look at how the funding has initially gone, under the design of the Evidence-Based Funding Formula, it so far looks like it’s working in a very equitable fashion in getting resources to the communities that need them the most and fastest,” the CTBA’s executive director said. “It can always be improved, but you have to focus on the good news when you can find it; and there clearly is some good news in the initial implementation of the model.” 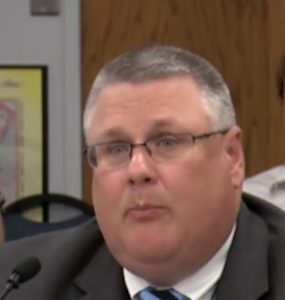 Robert Wolfe, chief financial officer for the Illinois State Board of Education, tells members of the Evidence-Based Professional Review Panel that, in spite of the new funding formula, there are still funding equity issues in the state. (Blueroomstream.com)

Members of the panel will meet on a periodic basis to study specific aspects of the formula. The panel will recommend modifications to continue improving school-funding to meet the needs of all students in Illinois. All panel meetings will be open to the public and include an opportunity for public comment.

“School-funding reform was a landmark advancement for fairness in Illinois,” Smith said. “The Professional Review Panel is a very important part of our continuing work to tune evidence-based funding to meet the needs of children, families and communities across the state. Bringing diverse voices to the table will help us identify necessary improvements. We encourage and value public participation to ensure the funding system serves all students.”

The panel will study topics including the format and scope of school districts’ annual spending plans, the “at-risk student” definition, funding for regional safe schools, early childhood education and other investments. Panel members will make recommendations to the State Board of Education, the General Assembly and the governor for continual recalibration of the landmark funding system.

There are 28 members appointed by Smith, Gov. Bruce Rauner and legislative leaders. Smith noted that panel members reflect the geographic, socioeconomic, racial and ethnic diversity of the state, including representative with expertise in bilingual education and special education.