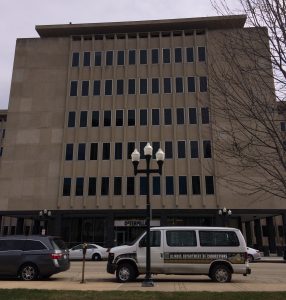 Caterpillar Inc.’s headquarters at 100 NE Adams St. in Peoria. A fleet of investigators besieged the building March 2 in an investigation into the company’s alleged $2.4 billion Swiss tax evasion plan. IRS, FBI, SEC and other agencies were involved, and Caterpillar divisions in East Peoria and Morton were also included in the raid. (Photo by Holly Eitenmiller/for Chronicle Media)

Just after delivering a sobering blow to Peoria with plans to shutter its world headquarters for Chicago, Caterpillar, Inc. seems to have made yet another jab on a national level.

On the morning of March 2, a crew of investigators, some wheeling large black security cases alongside, swarmed the building at 100 NE Adams St., as well as its East Peoria data center and Caterpillar Logistics Services Inc. in Morton.

Caterpillar also has a plant in Montgomery and in Joliet but no agents were present at those two locations.

Among them, investigators from the IRS Criminal Investigation Division, the U.S. Department of Commerce’s Bureau of Industry and Security’s Office of Export Enforcement, and the Federal Deposit Insurance Corp.’s Office of Inspector General.

Some windbreakers simply read “FBI” or “Police: Federal Agent” on the reverse. All of them allegedly investigating the heavy machinery manufacturer’s tax strategy to dodge paying approximately $2.4 billion in U.S. tax dollars.

Investigators targeted, then sequestered in the cafeteria, a group of employees, prohibiting them from leaving the building. It is not known how many employees were pegged, or from which departments.

According to Law360.com, Pill alleges Caterpillar and PwC “breached their fiduciary duties” by blatantly disregarding a 2014 Senate committee report warning Caterpillar of the hazards of launching the CSARL tax plan. The company was subsequently fined $1 billion in penalties and back taxes, and is appealing that decision.

Additionally, it bought out whistleblower Daniel Schlicksup. As Global Tax Strategy Manager Caterpillar in 2004, Schlicksup showed concerns regarding the company’s tax strategy, and was subsequently demoted and transferred out of the tax department. 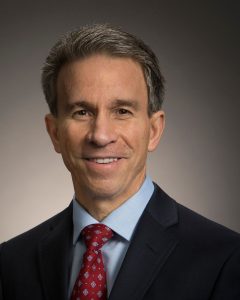 Also, involved in Pill’s suit; Bucyrus International Inc., an $8.6 billion acquisition made under then CEO Doug Oberhelman in 2011, and Caterpillar’s largest acquisition to date. The mining was purchased at 32 percent above Bucyrus’ stock value, according to Crain’s Chicago Business.

In 2016, Caterpillar announced it would cut 200 jobs from the Bucyrus plants in Milwaukee and was mulling the sale of a portion of the mining business.

According to a March 2014 U.S. Senate Permanent Subcommittee on Investigations, the Swiss tax evasion scheme evolved in 1999, and, through 2009, the company diverted $8 billion in profits to CSARL, resulting in the $2.4 billion evaded tax dollars.

By funneling profits through CSARL, Caterpillar was only required to pay around 5 percent in taxes to the Swiss government, as opposed to the average of 35 percent demanded by the IRS.

Ironically, upon his early retirement at the end of 2016, Oberhelman was awarded a $17.9 million annual compensation package, involving cash, stock, pension and additional benefits, a stipend which was increased from $15 million in 2013, and again in 2015 from $17.1 million; an increase of nearly $800,000.

As of yet, no charges have been filed against anyone at Caterpillar during this first day of investigations. Raids at the company’s East Peoria and Morton divisions appeared to be handily resolved a few hours after lunch, while investigators remained at headquarters into the evening. 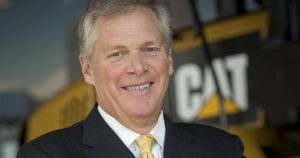 Former Caterpillar, Inc. CEO Douglas P. Oberhelman, who succeeded Jim Owens in 2010. Oberhelman, who was garnering a $17.9 million annual compensation package, retired at the end of 2016, 45 months earlier than expected.

In a statement released by the company following the raid, Caterpillar claimed the investigation stems from a 2015 filing with the Security and Exchange Commission, resulting in an informal investigation of the CSARL tax plan. The SEC warned the company to maintain all relevant documents.

Whatever the instigation of the investigation may be, the claims remain relatively the same. In response to the development, Caterpillar stock sagged. NYSE reported a 4.28 percent drop at close March 2.

According to Investorplace.com, the company reported, in its most recent filings, that “On Jan. 8, 2015, the Company received a grand jury subpoena from the U.S. District Court for the Central District of Illinois. The subpoena requests documents and information from the Company relating to, among other things, financial information concerning U.S. and non-U.S. Caterpillar subsidiaries (including undistributed profits of non-U.S. subsidiaries and the movement of cash among U.S. and non-U.S. subsidiaries).”