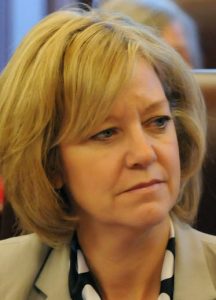 Ives’ “Thank you, Bruce Rauner” ad rips the governor for “not being in charge and leaving Mike Madigan in charge;” being “the worst governor in the country” as proclaimed by the National Review; “caving on all 44 points he promised in the campaign;” “betraying all Illinois Republicans,” and giving Chicago Mayor Rahm Emanuel “everything he wanted and more.”

While some may view those shots as politics as usual in Illinois, some of the other images in the commercial have brought an outcry from advocacy groups and political leaders. There is a transgender man in a dress thanking Rauner for letting him “use the girls bathroom.” There is a woman thanking Rauner for having “all Illinois families pay for my abortion.” There is another woman in a Chicago Teachers Union T-shirt thanking Rauner for making residents of Illinois “bail out Chicago teachers’ pensions;” and there is a man with a bandana over his face thanking Rauner for signing legislation to make Illinois a sanctuary state “for illegal immigrant criminals.”

State Sen. Daniel Biss (D-Evanston), who is running for the Democratic nomination for governor, said the Ives ad is repulsive.

“It’s absolutely antithetical of Illinois values and the type of politics we should be holding ourselves to,” Biss said. “Any elected official or candidate who does not disavow this horribly offensive ad outright should be ashamed.”

Erika Harold of Urbana, the Republican candidate for attorney general, said that the ad should not be airing.

“This ad denigrates, mocks and marginalizes groups of Illinoisans and cannot represent our Republican Party,” Harold said. “I call on the Ives campaign to immediately take it off the air.”

Tim Schneider, chairman of the Illinois Republican Party, also said that ad should be stopped.

“Ives should pull down the ad and immediately apologize to the Illinoisans who were negatively portrayed in a cowardly attempt to stoke political division,” Schneider said.

The party chairman added that Ives’ ad is not what Illinois Republicans are about.

“Representative Ives’ campaign ad does not reflect who we are as the Party of Lincoln and as proud residents of our great and diverse state,” Schneider said.

“At a time when our leaders should be bringing Illinoisans together, Jeanne Ives is launching a campaign of division and rancor,” the organization said in a statement. “We need a governor who will stand up for all Illinoisans, not someone who will target transgender Illinoisans for her personal political benefit.”

Personal PAC, a nonpartisan political action committee dedicated to protecting and advancing reproductive rights for all women by recruiting, electing and holding accountable pro-choice candidates to state and local office in Illinois, called the campaign ad “disgusting” and called on state residents to stand on the side of equality and work with Personal PAC to defeat candidates on the wrong side of women’s health.

“I think it is pretty despicable that they would do this, but I’m not surprised because there is this element that exists and I hope that it motivates decent-minded people to register to vote and go out and vote people like her out of office,” said Personal PAC CEO Terry Cosgrove.

— GOP candidate Ives under fire for ad against Rauner —