Gov. Bruce Rauner ordered the General Assembly back to Springfield for a special 10-day session from June 21-31 to try to hammer out a last-minute budget before the July 1 end of Illinois’s fiscal year.

Meanwhile, a group of GOP lawmakers held a press conference in Chicago June 14, presenting a handful of seven bills they called the Capitol Compromise, which they said the governor was willing to pass immediately.

According to House Minority Leader Jim Durkin (R-Western Springs), these bills were meant to take up where the “Grand Bargain” bills left off.

Rauner allegedly torpedoed those bills in February, by advising GOP senators not to vote for them when he presented his own budget Feb. 15. The Senate Democrats pushed through their own budget May 31, which was never taken up by the House.

The new GOP budget differs from Rauner’s proposal with a “hard spending cap of $36 billion, with $5 billion worth of reforms,” Durkin promised. Rauner’s budget topped out at $37.3 billion, as did the Senate Democrats’ plan.

The seven-sister bills included a proposed budget, which had some elements of the Democrats’ proposal, such as across-the-board cuts to most state agencies and branches of government, according to notes provided by the lawmakers. The budget bill also had a $4 billion bond to immediately pay off the worst of the state bill backlog. Previous budgets borrowed $7 billion for that task. 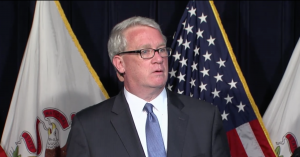 Both chambers have already passed school funding reform (SB1) and government consolidation (SB3) with heavily Democrat, but not veto-proof, majorities.

Sen. Tom Cullerton (D-Lombard) said he was “frustrated” to see his local government consolidation bill, SB3, which passed both chambers get sent to the drawing board by Republicans. Cullerton said the bill was modeled after the bi-partisan ACT (Accountability, Consolidation, Transparency) Initiative developed with Republican DuPage County Board Chair Dan Cronin. The initiative reassesses and consolidates up to 24 different overlapping government agencies, and is projected to save $100 million in DuPage County.

Cullerton said he wanted to make a dent in the state’s 7,200 local taxing bodies.

Meanwhile, organizations that funded the Illinois Lottery and summer highway construction announced they might pull back if the state can’t get its budget act together. The Multi-State Lottery Association announced it would drop Powerball Illinois and Mega Millions also said it would pull out of Illinois without assurance the state could afford to payoff prizes without a state budget, according to documents released by the Illinois Lottery.

The Illinois Department of Transportation sent out a warning to contractors they would begin to cancel summer construction projects.

“Due to the General Assembly’s refusal to pass a balanced budget, the Illinois Department of Transportation loses its ability to pay contractors starting July 1,” Guy Tridgell, IDOT spokesman, said in an email.

“While we are hopeful the situation is resolved before then, the department is notifying contractors that all construction work is to shut down on June 30.”

“Estimates are as high as $20 million to shut down jobs around the state,” wrote Marc Strawn, a lobbyist for the Association of General Contractors of Illinois. “It will cost more to re-mobilize these projects when IDOT does get a spending plan enacted.  Arguably, $50 million will be wasted as the parties continue to fight.”

Democrats responded to the GOP bill bundle with skepticism that the bills were reheated leftovers from the original Grand Bargain with no new compromises included.

— GOP lawmakers head back to Springfield with ‘compromise’ bills —