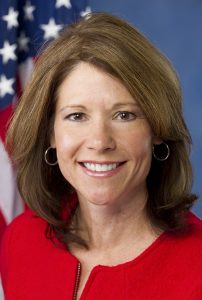 Cheri Bustos will seek a fourth term in Congress this year in what has traditionally been a Democratic-leaning 17th District.

Bustos, a Democrat who previously worked in journalism and health care fields, was unaffected and easily held her own with a 20-point victory over Republican Patrick Harlan.

But that close presidential race appeared to embolden national Republicans in early 2017 when they announced they’d target Bustos for defeat, one of 36 congressional districts where Trump was thought to be popular.

As the new year dawned, national political analysts suggested the GOP may be overly optimistic. Cook Political Report and Inside Elections rate the 17th District as solidly Democratic while Sabato’s Crystal Ball sees it as likely Democratic.

Bustos has been a reliable anti-Trump vote in Congress, opposing the Republican president nearly 75 percent of the time in 2017. That included opposition to a Republican tax code overhaul that passed on party-line votes, against a bill dismantling consumer protection regulations and against repeal of the Affordable Care Act.

But she’s also critical of her own party for not paying attention to working class voters that Trump tapped into.

“I think the feeling among the working class folks that we are not focusing on what’s important to them,” she said in a CNN interview last month. “Are we talking about making sure that their wages can go up? Are we talking about the strength of the middle class and do we have the policies that support that? Are we acknowledging that their wages are not what they were when we had better times around here?

Bustos is unopposed for renomination. Two Republicans seek their party’s nomination in the March primary.

“I have seen what vision and commitment to our local area can do to improve things,” Kleine said in a statement announcing his candidacy.  “We need a congressman who has a record of creating jobs, someone who is focused on what we can accomplish together (and) someone who wants to go to Washington, D.C. and work on both sides of the aisle to move our country forward.”

Kleine is president of Kleine Companies and a partner in MAK Properties with his wife, Jeannette. He also sits on boards for five local organizations including the OSF St. Mary Medical Center Board and the Knox County Area Partnership for Economic Development Board.

Bill Fawell, who calls himself a “Ron Paul-style Republican” is  running on a platform to decentralize the federal government.

“The biggest issue facing America is the abuse of America by our over centralized federal government and its impact upon the nation’s finance, debt, jobs, healthcare and the madness of endless war,” according to a statement on his web site.

Fawell, a 63-year-old real estate broker from Galena, is a member of a DuPage County family of  former Republican office holders. He ran for Congress in 2014 as a Libertarian write-in candidate.

The 17th district includes the northwest portion of the state, includes Moline and Rock Island as well as parts of Rockford and extends south to cover a portion  of Peoria.