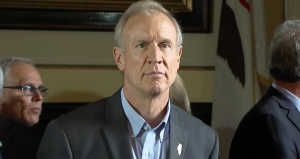 Springfield’s “special session” last week by the General Assembly brought the state no closer to resolution of school funding for the upcoming school year.

The Democrat-crafted school funding reform bill, SB1, was not sent to Gov. Bruce Rauner’s desk by Monday, July 24 as he had demanded. So, Rauner asked lawmakers to return Wednesday and Thursday to the capitol building to hammer out a school funding compromise, but they met for about a half hour both days and then adjourned.

“Regarding school reform, the governor has adopted a no-compromise position to keep the state in chaos,” Madigan said in a rare appearance. “The plan to be on the governor’s desk is fair to every student in the state of Illinois.”

Madigan said under the new formula, almost 300 other Illinois school districts received more money per pupil than CPS was allotted. Madigan said he didn’t think the amended veto would end up in the House, because it had to pass through the Senate first. But then he hinted there were, “enough votes in the House to override the amendatory veto.”

On Thursday, Rauner corralled GOP lawmakers from the House and Senate into a special closed meeting, where he allegedly told them,  “a revolution is coming,” and that SB1 was “evil” and a “Chicago [Public School] bailout,” according to leakers who passed information to news reporters.

After a group of 15 GOP lawmakers helped override Rauner’s budget veto and raise income taxes, it appears Rauner sought to convince legislators that they should not overrule his announced “amendatory veto” of SB1 to zero-out pension pick-ups for CPS.

Rauner was clearly frustrated and held a press conference where he took no questions.

Rauner’s website pitted Chicago against the rest of the state by publishing a plug-’n’-play school funding calculator called “How much more you’ll get under our plan.”

The site shows how much funding school districts outside Chicago would receive if CPS was stripped of a $215 million pension pick-up and a “block grant” over another $200 million. The numbers were provided by the Illinois State Board of Education, ISBE said.

Meanwhile Senate President John Cullerton promised to release the bill on July 31, just days before many school districts must finalize their budgets for the year. General State Aid for school districts is due Aug. 10.

Cullerton issued a statement Thursday calling on Rauner to sign SB 1 without making any changes.

“The fastest way to help the children is to sign this historic education reform into law,” Cullerton said. “We passed an overhaul of the worst public school funding system in the nation. All the governor has to do is sign his name to get credit.”