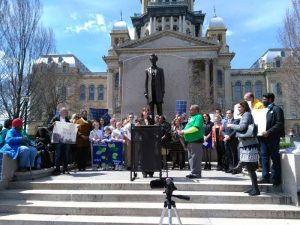 Legislators joined environmentalists and the Illinois Environmental Council in Springfield on April 6 to rally for funding of clean energy programs. (Photo courtesy of the IEC)

From the Great Lakes to agriculture, potential cuts at the federal level could impact a range of environmental programs across Illinois.

President Donald Trump and his administration have proposed a range of budget cuts to programs and services funneled from Washington, D.C., to states, counties and municipalities across the country.

The U.S. Environmental Protection Agency has been one of several targets of Trump’s budget cuts.

Although estimates have wavered, one of the most recent projections pegs the federal EPA’s budget cuts at 31 percent by reducing staff and eliminating more than 50 programs under the agency’s auspices.

“It is troublesome,” Michael Brown, executive director of the Normal-based Ecology Action Center, said of the proposed cuts. “It does have me concerned.” 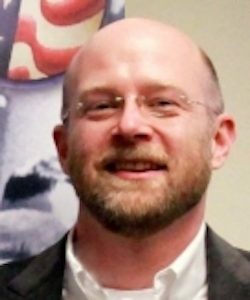 Brown is not the only environmental steward keeping a watchful eye on the federal EPA news.

By virtue of Illinois’ diverse landscape, the federal EPA cuts would have varying impacts from one corner of the state to the next.

If implemented as proposed, the EPA cuts would almost wipe out federal funding toward the Great Lakes Restoration Initiative, for instance. That particular program has been aimed at improving the vitality of each of the waterways in the system, including Lake Michigan.

“For recreation, health and safety, the protection of the Great Lakes ought to be a top priority,” Michael Mikulka, president of AFGE 704, said in the statement. “Instead, (funding) is being slashed.”

Trump, who has defended his spending plan by asserting he is delivering on campaign promises, is essentially shifting more of the funding burden onto states.

For cash-strapped Illinois, such a maneuver is a concern to the environmental group leaders interviewed for this story. The state-level Environmental Protection Agency has been grappling with its own funding issues in recent years. 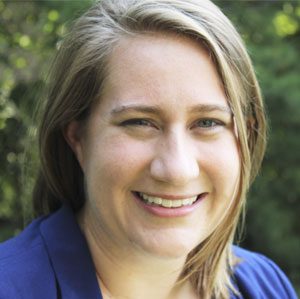 In Central Illinois, where the Great Lakes Restoration Initiative is not a direct issue, leaders are concerned about a range of issues, including the opportunity to obtain grants for various programs.

Mary Vandevord, president and CEO of Mascoutah-based Heartlands Conservancy, said her organization is in wait-and-see mode, from a budgetary perspective.

Heartlands creates its budget at the beginning of each year, Vandevord said, though she is quick to point out some of the items in this year’s plan might have to be scrapped, depending what transpires in the nation’s capitol.

“It’s put us on edge,” Vandevord said. “It does make it challenging.”

Heartlands has historically relied on federal grants to help administer programs for persons working in the agriculture sector.

“We might not be able to do those programs in the future,” Vandevord said.

Over at the Springfield-based Illinois Environmental Council, executive director Jennifer Walling said she is cautiously optimistic the ultimate cuts will not be as severe as proposed. 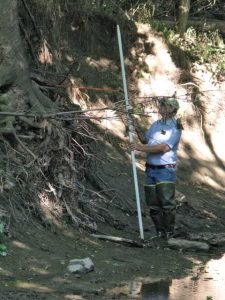 The Upper Silver Creek Watershed Plan, developed by Madison County and HeartLands Conservancy, is addressing water quality and flooding problems in a strategic way in the watershed in southwestern Illinois. It is Funded by Madison County and by Illinois Environmental Protection Agency (IEPA) under the Federal Clean Water Act. (Photo courtesy of Heartland Conservancy)

“I can’t see a budget that has all of the cuts mentioned,” Walling said. “But we do have a lot of concerns.”

The environmental groups’ angst extends beyond dollars and cents.

Brown said he is equally alarmed by some of the policy decisions coming out of Washington, D.C.

Trump’s plan, for instance, calls for rolling back the fuel efficiency standards that were put in place by former President Barack Obama.

“I find that troublesome and worrisome,” Brown said. “We need more federal leadership on some of these important issues.”