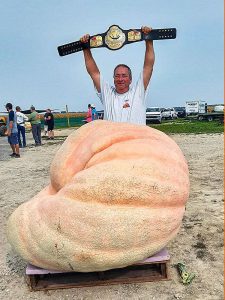 Henry Bartimus of Dewitt displays his prize for growing the biggest giant pumpkin in 2020. The behemoth weighed 1,673 pounds. (Photo by Mark Mourlas of PumpkinPhoto.com)

Illinois grows lots of pumpkins. Some nurture giant ones.

“It is an addictive hobby,” Bartimus told FarmWeek. “If you grow them a few years, then you’re probably hooked for life. When you see a pumpkin grow 2 pounds in one hour, it’s just amazing. Many will grow 40 to 50 pounds every day for three weeks then start to taper off.”

The pumpkin enthusiast said growers of all backgrounds embark on growing a giant when photos or news stories spark their interest. “Many just have a love of pumpkins,” he said.

Bartimus estimated about seven growers regularly vie for the state crown. He described Giant Pumpkin Growers Association as open to anyone from Illinois who brings a giant to the weigh-in. For information, visit igpga.com or follow the group on Facebook.

To offer prizes for the largest pumpkins, the club auctions giant pumpkin seeds from December through February. Many auctions occur online at bigpumpkins.com.

“If you look into the genetics of the seed, you may be able to ask the grower and they may give you seeds if you pay the postage,” he added.

Growing a colossus requires a lot of TLC.

Seeds usually are started indoors about April 8 before they’re set outside in huts with heaters and fans. Many growers use underground heating cables, Bartimus said.

“We try to pollinate our plants from June 15 to July 1. By this time, they have grown to 30 feet wide and 18 feet long,” he explained. The plants are pruned to limit their size. When the pumpkin is 30 days old, the grower stops all vine growth, so all the plant’s energy goes into the pumpkin.

If it doesn’t rain, a grower will provide 50 to 120 gallons of water daily for each 1,000 square-foot of plant. Only one pumpkin is grown on each plant. Growers will work one to eight hours daily on a single plant, according to Bartimus.

Soil testing is one of the most important factors. Top growers add nutrients throughout the growing season. Bartimus fertilizes his plants daily, adding as little as a single teaspoon. He uses a lot of seaweed and humic acid.

The main pests are squash vine borers, cucumber beetles and squash bugs. Powdery mildew can be a problem. “You almost have to work on them every day if a problem starts like a disease or rot,” he said. “Each minute counts at getting it under control.”

Giant pumpkins don’t like to get too hot or too cool, preferring temperatures ranging between 75 and 80 degrees. “Many growers use a type of shade cloth or automatic misting systems to cool the plant along with several fans,” the grower said. “Excessive rain slows down growth due to low oxygen in the soil, and vines can rot from it, too. Much of the U.S. had problems growing giants this year.”

The pampered pumpkins may star in commercial displays, be carved by artists, dropped from cranes at fun events, fed to zoo animals or just sit in their proud growers’ yards.

Bartimus advised interested growers to not be shy and bring any size pumpkin to be weighed. “You won’t be laughed at or made fun of. It is a good place to meet growers and ask questions,” the veteran grower said. “Sometimes just getting any size pumpkin to survive to the end of a season can be a challenge, and the top growers know this.”

Asked if growing giant pumpkins is a hobby, advocation or passion, Bartimus answered, “All of them. To me and many other growers, it’s a challenge more against yourself than the competition, but yes we all like to win.”