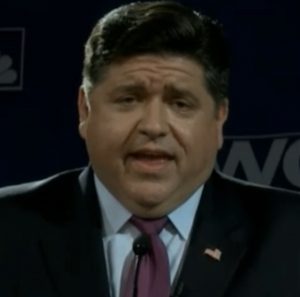 Democratic gubernatorial challenger JB Pritzker said that his Republican opponent is accountable for health problems that occurred in the Quincy Veterans’ Home. (BlueRoomStream.com)

The personal attacks show no sign of stopping as the gubernatorial race heads into its final weeks.

In their last televised debate, held Oct. 11 in Quincy, Republican Gov. Bruce Rauner and Democratic challenger JB Pritzker both said their opponent is unfit for office and that a criminal investigation hangs over the other’s campaign.

Debating just miles from the Quincy Veterans’ Home where 14 veterans and their spouses died from Legionnaires disease, Pritzker said Rauner is accountable for the problems at the Veterans’ Home. Pritzker said while Rauner and his administration blamed everyone from U.S. Sen. Tammy Duckworth to the weather, disease ran rampant and veterans paid the ultimate price.

“It’s our obligation to defend our veterans and keep them safe,” Pritzker said. “That’s not something that Governor Rauner did, and as a result his failure and fatal mismanagement is now under a criminal probe as is his administration. It’s a shameful neglect of our veterans who we should be standing up for every single day.”

Rauner said he has spent his life supporting veterans and that his administration responded as soon as the disease was first discovered in the home.

“Immediately, the first day, action was taken to keep the veterans safe,” Rauner said. “Water supplies were shut off, windows were closed, fountains were shut down, bathtubs drained and no longer used, and the veterans were evaluated for their health condition. Those who were affected were treated promptly. Everyone else was monitored; and the families of those veterans who showed some symptoms were notified of the health change in the condition of their loved one.” 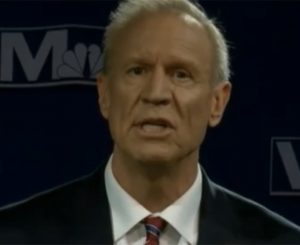 Gov. Bruce Rauner said that it is not a coincidence that the probe into his administration’s handling of the Veterans’ Home crisis in Quincy came one day after a report on his opponent’s effort to “defraud taxpayers” was made public. (BlueRoomStream.com)

He said because it has become clear that the Legionnaires bacteria cannot totally be eradicated from the Veterans’ Home’s pipes, all the facilities on the campus are being rebuilt.

“I think much of this so-called criminal investigation is a political ploy to divert attention from the tax fraud Mr. Pritzker has engaged in,” Rauner said. “I believe it is shameful abuse of power by the attorney general.”

Rauner said it was not a coincidence that the criminal investigation was announced one day after Pritzker was determined to have schemed to defraud the taxpayers of Illinois.

The governor said the inspector general of Cook County determined that Pritzker engaged in “tax fraud, mail fraud and perjury.”

He said the Veterans’ Home probe was started “covering up (Pritzker’s) actual criminal behavior of stealing $330,000 from the hardworking men and women of the state of Illinois.”

Pritzker got property taxes reduced on a mansion because the property was deemed uninhabitable when toilets were taken out of the residence. Pritzker said it was when a remodeling effort was stopped that he sought a reduction in the home’s taxes. He said he paid the money back when the renovation work began again.

“The voters can, in no way, trust Mr. Pritzker on any issue. He’s demonstrated a complete lack of integrity, ethics and character,” Rauner said. “He is not worthy of elected office in the state of Illinois … Mr. Pritzker has returned the $330,000 that he stole from every taxpayer in the state of Illinois because he knows it was wrong, but that in no way reduces the seriousness of his crime. These are serious white-collar crimes. People have gone to prison for far less than Mr. Pritzker has committed.”

Rauner pointed out that four of his nine predecessors served time for wrongdoing. “Mr. Pritzker,” he said, “has a very good chance of being No. 5.”

“You’ve just heard a desperate rant from a failed governor who is in the final hours of his campaign and his governorship,” Pritzker said. “… As for the renovation project that was halted, it was unclear if the home would be sold or rented out, and then the project was restarted. All the taxes that were assessed were paid, but this is Governor Rauner trying to distract from his own record (of the) 22 property-tax reassessment he sought and illegally sought three homestead exemptions, and then he wants to raise property taxes a billion dollars.”

Conservative Party candidate Sam McCann and Libertarian candidate Kash Jackson were not included in the debate.