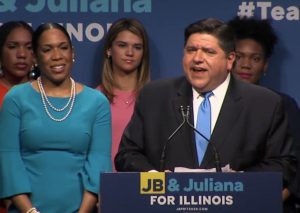 In what could be the most expensive governor’s race in U.S. history, Democratic challenger J.B. Pritzker will square off against incumbent Republican Bruce Rauner in November.

“Rauner and Pritzker have no practical limits,” Chris Mooney, professor of state politics at the University of Illinois at Chicago, said of the billionaires. “They will buy up all the ad times around the TV news. They will simply buy it all up. We will see, in the end, what reaction voters have and if we get sick of it.”

The spending benchmark for a U.S. governor’s race was set in 2010 in California where $280 million was spent, $110 million of that by Meg Whitman, former chief of eBay.

“No one spent like they did in that race,” Mooney said. “They could go over $280 million in the Illinois governor’s race, but remember our population is about one-third of the size of California.” 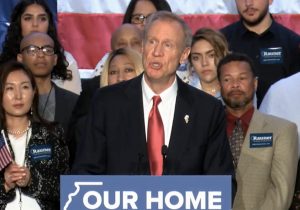 Gov. Bruce Rauner talks to supporters after his close victory in the Republican primary. Rauner barely held on against conservative state Rep. Jeanne Ives. He will face Democrat J.B. Pritzker in the General Election in November. (Blueroomstream.com)

So Illinois is almost guaranteed to be the most expensive governor’s race per vote after this General Election.

Mooney noted that should Rauner, a private-equity executive, and Pritzker, a venture capitalist, top that California spending plateau, Illinois would have the dubious honor of the most expensive governor’s race and the most expensive state Supreme Court race.

Mooney said he was surprised that the Republican primary was as close as it was, with Rauner winning by the razor-thin edge of 51 percent to 49 percent.

“It’s got to shake your confidence, even for a confident guy like Rauner,” Mooney said.

“Normally an incumbent is not significantly challenged,” the UIC professor said. “Ives was outspent 10 to 1 and started out as an unknown outside of Wheaton.”

Mooney felt that if Ives had not run the incendiary television ad blasting Rauner’s stances on transgender individuals, immigrants and state-financed abortions she would have won the primary.

According to Mooney, the conservative base accounts for 25 to 30 percent of the Illinois Republican Party.

“In 1994 when Jim Edgar was running for re-election, Jack Roeser — the Dan Proft of his day — got 25 percent of the Republican primary vote against a governor who was quite popular at the time,” Mooney said. “That shows where the conservative baseline is.”

Altruism and self-aggrandizing, according to Mooney.

“For most of the individuals running, money is not a top priority,” Mooney said. “A lot decide they can’t afford to run for office, though. They don’t want to live in a duplex like Biss. They have to make those judgments.”

Mooney said many of the wealthy individuals who run for office today simply want to be of assistance.

“They want to help. It is like why people go into teaching or the priesthood,” Mooney said.

He said being liked is part of the equation for joining the political ranks as well.

“They are saying, ‘Love me. Vote for me.’ They have got to get some satisfaction from it,” Mooney said. “

He said Illinois is kind of late to the party in terms of the super wealthy running for office, noting that Florida, Massachusetts and other states have had super rich individuals in the governor’s mansion for a while now.

“They are so rich that they don’t need the money,” Mooney said of super rich neophyte politicians. “They want to be able to sit around at the country club and be called ‘Governor.’”

“State legislators make $75,000 a year,” Mooney said. “Compared with a senior lawyer at a firm, that is nothing.”

The same script that propelled Rauner to victory in 2014 could spell his demise this year, Mooney noted.

“In 2014, Rauner ran against a weak incumbent who was painted as a failure. He was a fresh face and had a vast amount of money,” Mooney said. “Pritzker can say the same things.

“The weak incumbent thing can be flipped against Rauner. Regarding re-election, if I had a Magic 8-Ball, all signs would point to ‘No.’”