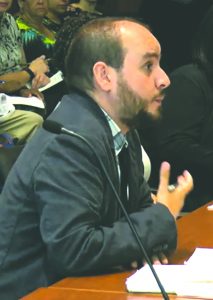 Dr. Fernando De Maio talks to a state House committee Sept. 12 about the number of black infants born with low birth weights. He said low birth weights are seven times more likely in struggling Chicago communities than in ones where residents are better off economically. (BlueRoomStream.com)

Social inequities in Illinois are causing the infant mortality rate among blacks to be double that of whites, according to a doctor who has studied the issue.

“At the root of this issue is not the health-damaging behavior of individuals,” De Maio said at a Sept. 12 state House hearing about the high mortality rate for black mothers and their infants. “At the root of the issue is a social issue: racism and discrimination.”

Kathy Tosses-Milligan, director of global assets and innovative approaches for the University of Illinois at Chicago’s Cancer Center, who has been studying infant mortality in the state for the last two years, said that Englewood, a predominantly black neighborhood in Chicago, has an infant mortality rate of 24 per 1,000 live births.

“They’ve been able to achieve something remarkable,” De Maio said, “equity in health.”

“So the worst-off communities (in Toronto) are about our average,” De Maio said. “They have effectively eliminated the bottom half of our low birth weight distribution.”

The Center for Community Health Equity representative noted that Chicago’s low birth weight average has virtually not changed since 1980.

“If we are to improve community health in Chicago, we need to learn lessons from what other places have done,” De Maio said, “to prioritize equity in health and invest in the health of all our residents.” 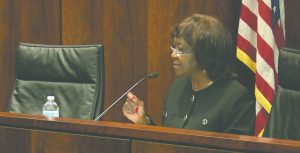 He noted that part of the difference in the two cities he compared is that Toronto residents are part of a Medicare for all system.

“No one in Canada thinks that health care is free,” De Maio said. “They view it as something that they are entitled to, that they don’t have to purchase.”

He said the country also promotes public policies that support the health of families.

She said the time has come to address the infant mortality rate in the black community, noting that the rate has remained stagnant for years.

She said there is plenty of attention on black celebrities like Serena Williams and Beyonce giving birth because they are high-profile individuals.

“But what about the other women and infants that have been dying and no one is saying anything about it?” Flowers asked. “… Why is this happening?”

Putting profits over people, she said, has helped create the infant mortality crisis in the black community. She said because of inadequate funding for health care in minority communities, black women and infants are at a higher risk.

“For some reason, more African-American women and infants of color are dying because of racism and unequal treatment,” Flowers said.