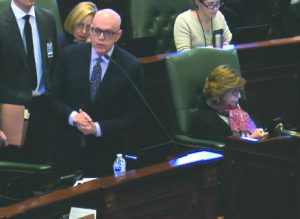 Getting legislation through the state House of Representatives will still run through the office of House Speaker Mike Madigan.

Rules dictating how the next two years of the House will run gives Madigan the power to call bills to the floor as he sees fit, much to the chagrin of Republicans in the House.

“This is incredibly frustrating as a lawmaker, but also for Illinois residents,” said state Rep. Mark Batinick (R-Plainfield). “We all deserve better.”

Republicans argued that the rules governing the House during this session do not create the transparency and engagement that voters called for during the midterm elections.

Holding up a large bill for emphasis during a Jan. 29 debate on the House rules, Batinick stated, “I have a bill here that is this thick. The way the rules are operating right now, is we could do a gut and replace, do a floor amendment and in one hour you’re going to be voting on a piece of legislation. I don’t believe that’s transparency.”
The rules vote fell along party lines with John Cabello (R-Machesney Park) not voting on the issue. Republican Dan Brady of Normal and Democrat Melissa Conyears-Ervin of Chicago were absent.

Durkin said it was just weeks ago when Gov. J.B. Pritzker was sworn in that all the talk was about “working together and getting things done on a bipartisan basis.”

“The love in the building was gushing over,” Durkin said. “Now, it seems to me with these rules we’re erase all of that good will and spirit that we talked about at the swearing-in.”

During the debate on the proposed rules for the 101st General Assembly, state Rep. Tom Demmer (R-Dixon) urged his colleagues to reject rules that “weaken the power of rank-and-file members.”

State Rep. Grant Wehrli (R-Naperville) said that the way the rules were constructed, it gives Madigan, a Chicago Democrat, control over all lawmakers.

“A ‘yes’ vote on these rules subjugates our power to one individual.

“The last election cycle, this district was abundantly clear: they want Michael J. Madigan’s tenure as speaker to end,” Mazzochi said in a statement. “How does one man acquire so much control, power, and influence? Because the House rules let him control what legislation can reach the floor for a vote. 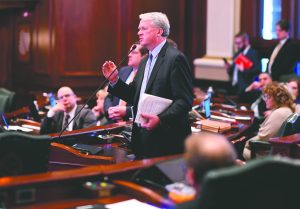 House Republican Leader Jim Durkin expresses his concerns about the House again “rubberstamping” its rules of governance and keeping control in the hands of Speaker Mike Madigan. (Jim Durkin photo)

“Every two years, Speaker Madigan requires two critical votes from Democrat members; first, their vote to re-elect him speaker of the House, which happened on Jan. 9. The second vote is for his House rules of procedure, this year styled as House Resolution 59.

“House Resolution 59 will keep the Illinois House on lockdown under Speaker Madigan’s thumb. He alone will have to power to decide which bills get out of Rules Committee, assigned to committee, voted on in committee, and voted on the floor. He can make those decisions unilaterally with no reasons given; no questions asked; and no matter how dire the circumstances needing to be addressed.”

Mazzochi noted that in the few months of her prior term, Madigan’s Rules Committee quashed a bill to end gerrymandering; her bill to increase punishment for underage sex traffickers and provide them with victim support; and her bill to pay down the state’s multibillion-dollar bill backlog, which significantly hurt local hospitals and senior care centers.

“All 12.8 million Illinoisans deserve an equal voice in the legislature. They deserve a transparent process that follows both the spirit and the letter of our State Constitution, which requires a simple majority in the ordinary course of business,” Mazzochi said. “Under House Resolution 59, you can have a supermajority in favor of legislation, and it can’t come to the floor for a vote if the speaker’s Rules Committee says ‘no.’ That is not transparent. That is not good government. When even a bipartisan supermajority of rank-and-file legislators supports a bill, it deserves a vote.”

Mazzochi also pointed out abuses inherent in the committee process as well.

“Even when bills do make it to committee, Madigan’s handpicked chairs can refuse to call them, or switch people on and off committees to avoid taking a vote that would hurt them in their districts.”

“These rules give us a process that, by design, gives the speaker unaccountable raw power. The rules expressly state his decisions ‘may not be appealed,’ and ‘may not be suspended,’” she said. “I urged a change to the status quo. The Democrats refused. I voted ‘no’ on Madigan’s rules because they are designed to subvert, not support, the will of ‘we the people’ in Illinois.”

House Republicans offered five amendments to promote transparency and diminish the Rules Committee legislative stranglehold over bills offered by ordinary members on both sides of the aisle:

House Majority Leader Greg Harris (D-Chicago) said that concerns about bottling legislation up in the Rules Committee are overstated. He said of the thousands of bills presented in 2017, only one was held up in Rules Committee.

“And that bill was by a Democrat,” Harris said.

He said that 90 percent of the legislation that comes before the body is passed without controversy.