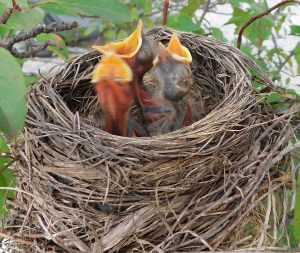 It’s spring breeding season and the Illinois Department of Natural Resources was residents not to handle baby birds or other young wild animals. (Photo by Jack McCarthy / Chronicle Media)

Spring is a busy breeding season for wildlife, and the Illinois Department of Natural Resources reminds Illinois residents not to bother or handle baby birds and other young wild animals.

Wildlife biologists are often contacted during the breeding season by well-meaning people who believe incorrectly that they may be protecting young wildlife by taking possession of baby birds, rabbits, fawn deer, and other animals that may appear to have been abandoned or orphaned.

In most cases, these animals and birds are still being cared for by their parents, which likely stay away from dens and nests if people are nearby.

The Illinois Wildlife Code provides legal protection for wildlife. It is against the law to keep wild animals as pets, or to raise wild animals believed to have been abandoned.  Additionally, responses by agencies like the IDNR to incidents involving wildlife can be costly to taxpayers.

Anyone with questions about care for possibly abandoned wildlife can contact a licensed wildlife rehabilitator. To learn more about potential wildlife conflicts, and keeping people, pets and wildlife safe, visit the new Wildlife Illinois website at https://www.wildlifeillinois.org/

All wild birds, except the Rock Pigeon, European Starling, and House Sparrow, are protected by federal law. This includes protection of eggs, nests, and feathers. The IDNR works with the U.S. Fish and Wildlife Service to protect and manage birds in Illinois.

Some additional reminders about wildlife in Illinois: