Democratic candidates running for Illinois attorney general shared their qualifications and plans with members of the disabled community during a forum Feb. 9.

Speaking at Access Living Chicago on Friday, seven of the eight Democratic candidates for attorney general courted votes from individuals with ties to the disabled community. State Rep. Scott Drury was not present.

Sharon Fairley said she looks forward to working with the disabled community to address their needs and concerns. 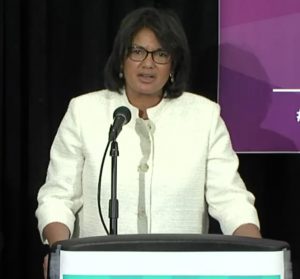 She noted that she is a lawyer, mom and concerned Democrat, who has been a longtime supporter of initiatives in the Chicago area for individuals with disabilities, especially the YMCA, which runs a camp program for children and young adults with spina bifida.

“As chief administrator of the Independent Police Review Authority, I enacted protocols to ensure persons with disabilities were able to file complaints with the agency and that those complaints were acted on immediately and with care,” Fairley said. “I also made several similar recommendations to the Chicago Police Department regarding how people with disabilities, particularly individuals with mental health concerns, are treated.

“I stand here as a strong advocate of the concerns that you have and want to be in a position to stand up for your rights, your health and your well-being.”

Aaron Goldstein said that he believes the rights of people with disabilities are civil rights and that we must appreciate that fact. 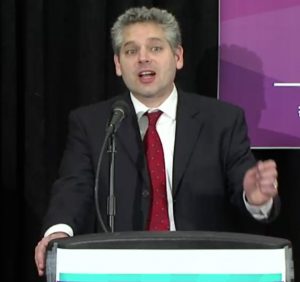 “What I have seen as a criminal defense attorney, as a civil rights attorney, is the discrimination against people with disabilities. I see the lack of mental health and rehabilitation services so that many of our jails and prisons are now housing for people with mental health issues. I want to stop that. I want to fix that as attorney general.

“We must see all these rights as civil rights. When I become attorney general, I will be an advocate for justice, justice for all of us, for all of Illinois.”

Renato Mariotti noted that he was born in Chicago to two parents who didn’t go to college and worked two jobs each to put him through school at the University of Chicago and Yale Law School. 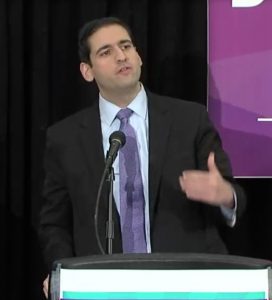 A federal prosecutor in Chicago for almost a decade, Mariotti said he has handled all kinds of cases, everything from human trafficking to child exploitation. He said he has handled cases where individuals with intellectual disabilities were victimized.

He noted that when trying a case in 2015, he began to experience pain in his legs that ultimately led to him being diagnosed with an autoimmune disease.

“During that time, I had trouble walking and needed to be in a wheelchair to get through the airport,” Mariotti said. “I learned firsthand the difficulties and how differently you are treated when you don’t have the same access as other people.”

Pat Quinn said during his time as governor he understood firsthand the work that has to be done to help people with disabilities. 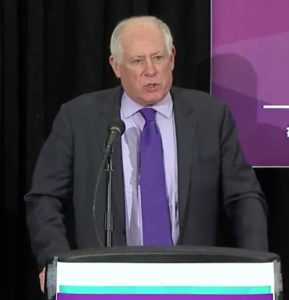 He said that he took the difficult step of signing budgets to provide adequate financing for human services.

“We had to raise the income tax to do it,” Quinn said. “I took the heat because it was important to do and I think it is very important in light of what happened when I left, seeing the cuts in services because of the lack of revenue. It is important to always have that and the attorney general stands for fair revenue for important services.

“I also supported wage increases for workers (with the disabled), including personnel assistants and direct support personnel. It is important those men and women be paid a living wage.”

He said it was tough to close the Jacksonville facility for the disabled as governor, but that “it was an institution that segregated people.”

State Sen. Kwame Raoul said that he has practiced law for almost 25 years and has been in the state General Assembly for 13 years. 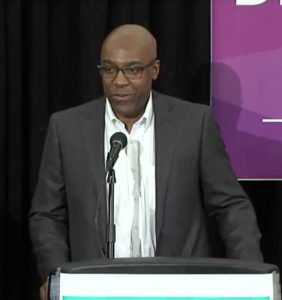 “During that course in time, I’ve been an advocate for those with disabilities, including advocating for my own daughter for accommodations in the education setting,” Raoul said. “I’ve done advocacy for my cousin who is legally blind and I spent time representing clients (with disabilities) when I had a small private practice.”

Raoul said in the General Assembly, he has sponsored legislation for those who enter the state’s correctional system on Medicaid, but don’t have access to their medications when they leave the prison system because they were not kept on Medicaid.

“I am currently sponsoring legislation to make sure that the response to a call for someone with a developmental disability has a mental health professional responding instead of a law enforcement response,” Raoul said. “I am committed to continuing my role as an advocate for individuals with disabilities.”

Nancy Rotering said when her son was diagnosed with a disability at age 2½ “our family was baptized by fire and I became a body part and I became his advocate.” 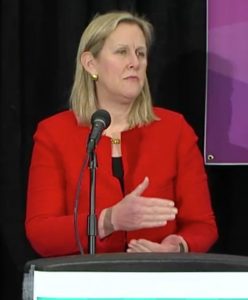 The mayor of Highland Park said that she will be an advocate for people with disabilities across Illinois as attorney general.

“We know that people with disabilities have challenges that come with their disabilities, but we also know that discrimination — whether on purpose or due to ignorance — can impact anyone’s ability to live their best life whether at work, at school, getting access to health care, even in our criminal justice system,” Rotering said. “I’ve been an advocate for people with disabilities as a parent. I’ve been an advocate as a volunteer at Lurie Children’s Hospital, teaching residents how to understand the impacts of dealing with patients and families, the entire package.”

Rotering said she has also been an advocate for the disabled serving as pro bono legal counsel for parents maneuvering through the public school system with their children and dealing with disabilities.

Jesse Ruiz said growing in the Roseland neighborhood on the Far South Side of Chicago there were a number of challenges. 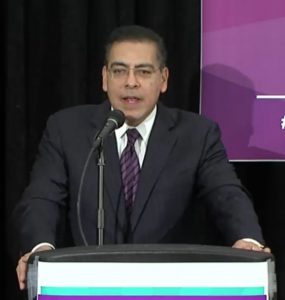 “So I fought. I became an attorney and pursued public service,” Ruiz said. “I fought to make sure people had equal opportunities and equal rights, to make sure no one was discriminated against because of who they were or what they looked like.”

He said when he joined the Illinois State Board of Education, he made sure the state funded organization like Reading for the Blind and Dyslexic (now Learning Allies).

“At the Chicago Board of Education as a board member, I made sure we fought for House Bill 4527 that requires charter schools to provide students with the special education services they deserve and are legally entitled to, making sure that every child has an opportunity to fully develop to their God-given potential.” Ruiz said. “That is why I have dedicated so much time to public education, because it is one of the mechanism that provide for every Illinioisan. It is a right in all of our self-interests.”