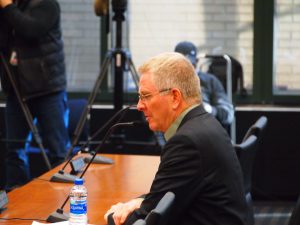 Rick Steves, host of PBS’ “Rick Steves’ Europe” and a proponent for the legalization of marijuana, talks last week to a joint state House and Senate hearing on the potential legalization of marijuana for recreational use in Illinois. Steves told lawmakers that many European countries and his home state of Washington have benefitted from legalized pot. (Kevin Beese/Chronicle Media)

Television host Rick Steves has looked out his office window and seen marijuana being sold for years.

However, the view in his hometown of Edmonds, Wash. changed a couple of years ago, according to the travel writer and host of  “Rick Steves’ Europe” on PBS.

“I look out my window and people are not selling pot on the streets. They are selling it in legal shops,” Steves said.

Washington has legalized the recreational use of marijuana. Illinois has just started talking about the idea.

Steves said the action, taken by the state of Washington in 2012, has taken away the black market for the drug and freed up jail space and law enforcement time for more serious issues.

“I’m not pro-marijuana,” Steves said last week before a state House & Senate joint committee looking at the possible legalization of marijuana. I am pro-civil liberties and anti-prohibition.”

He said there has not been an increase in people smoking marijuana since Washington legalized use of the drug.

“Anybody who wanted to smoke already does,” Steves noted.

Illinois officials are looking at legalizing the recreational use of marijuana as it could generate an estimated $699 million in new revenue.

“Marijuana is here to stay. We can either keep building more prisons or figure out a better solution,” Steves said. “I think it is obvious what the solution is, and it’s happening around the country as it did in my home state of Washington. We need to legalize the responsible use of marijuana by adults.”

State Sen. Heather Steans (D-Chicago) said that the time has come for making marijuana use legal.

“It is clear that prohibition doesn’t work and that by lifting cannabis restrictions we can encourage economic development in Illinois,” Steans said. “We are carefully considering all aspects and potential impacts of legalizing adult-use cannabis, including job growth.”

In addition to increased tax revenue, legalized cannabis could provide a boost for job growth in Illinois, according to proponents. According to a report from New Frontier Data earlier this year, the legal marijuana market could create more than 250,000 jobs in the U.S. by 2020.  Legalizing adult-use marijuana creates a variety of jobs, including scientists, dispensary employees and growers, among others, according to supporters of the legalization effort.

“Legalizing cannabis will spur the creation of new small businesses and much-needed jobs,” said state Rep. Kelly Cassidy (D-Chicago), who has co-sponsored legislation with Steans to make recreation use of marijuana legal in Illinois. “We are leaving hundreds of millions of dollars in economic activity on the table by continuing the outdated status quo of prohibition.” 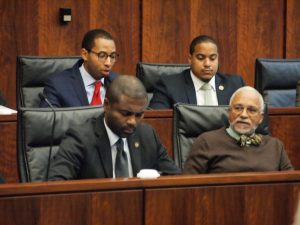 State Sen. Donnie Trotter (D-Chicago, bottom right) and other members of a joint state House and Senate hearing on the potential legalization of marijuana for recreational use in Illinois look at documents and listen to testimony at last week’s hearing in Chicago. (Kevin Beese/Chronicle Media)

Proponents note that tax revenue from the proposed legislation would support the State Board of Education; treatment and education programs for responsible marijuana, alcohol and tobacco use; and the state’s general revenue fund.

Steves noted that Illinois has data from other states to draw upon during its consideration of pot legalization.

“In Washington, we have a track record and we know it works,” Steves said. “States like mine that have legalized marijuana have learned that use doesn’t go up, crime doesn’t go up, DUIs do not go up. The only thing that goes up is tax revenue as we take the thriving illicit market and transform it into a highly regulated and highly taxed system.”

State Sen. Dan McConchie (R-Hawthorne Woods) said legislators should take as long as five years to act on marijuana’s legalization in Illinois. He said data could be compiled from states that have legalized pot and see what the pros and cons are.

He said he is not convinced that use does not go up with legalization and that problems don’t compound.

“Between 2013 and 2015 Colorado saw use go up 14 percent,” McConchie said. “Denver saw crime increase in every category.”

He said legalizing marijuana would not only create problems for Illinois, but neighboring states as well. The state senator said it would be the inverse effect of tougher gun laws in Illinois.

“We have more stringent gun laws, but people from other states are bringing guns here,” McConchie said.

Last week’s session was part of a series of hearings on various aspects of legalizing marijuana use among adults. Changes to the proposed legislation may be proposed in the new year based on the findings of the hearings, Steans said.