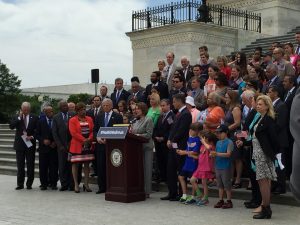 Illinois Congresswoman Cheri Bustos (D-East Moline, 17th Dist.) acknowledged she was “a little old for the Snapchat demographic,” but that didn’t stop her from broadcasting a social media stream from her phone during the Democratic sit-in of the House of Representatives overnight June 22-23.

“My journalistic instincts kicked in,” said Bustos, a former reporter, who represents constituents in Winnebago and Peoria counties. Bustos interviewed 70 of her congressional colleagues and broadcast 10-second clips throughout the sit-in.

The event revealed the transparency power of social media technology when House Republicans turned off the cameras in the chamber for a “recess” after Georgia Congressman John Lewis called for a sit-in in the “well” of the chambers. Thanks to phone app technology from Periscope, Facebook Live and Snapchat, congress members were able to keep a stream of broadcasts running overnight, which was picked up by C-SPAN.

The Democrats were demanding a vote on two initiatives that had already failed in the Senate: The so-called “No Fly-No Buy” legislation proposed to block gun sales to people tagged on a Department of Homeland Security “no-fly” list, and an added bill strengthening firearm background check rules by closing loopholes for internet and second-hand gun sales. 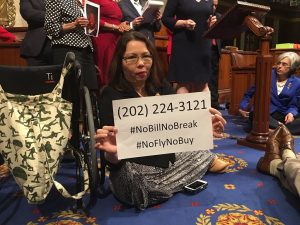 House members cannot filibuster like Connecticut Senator Chris Murphy did for 15 hours to get the Senate to vote on the two failed bills. The sit-in was hastily planned by a small group of House Democrats, but grew in momentum as members got instant constituent feedback through social media and by phone call.

Democrats who represent Cook County were among the most emotional and vocal speakers at the sit-in, since the shootings and gun deaths in Chicago have spiked to more than 300 so far in 2016, double the number by June 2015.

During a speech on the Capitol steps, 1st Dist. Congressman Bobby Rush explained the proliferation of guns in Chicago.

“I live in a danger zone,” he said. “When my constituents pull up to the intersection, if a car pulls up beside us, there’s fear. We don’t know where a bullet will come from,” he said. “Gun violence is so bad in Chicago that the murder of a three-year-old yesterday is old news. “

Rush shared his own story of the shooting death of his son in 1999. “I remember my son laying in the hospital bed swollen up twice his normal size,” he said. “My daughter, his sister, was frustrated, yelling ‘Dad, dad, do something.’ I couldn’t have felt more helpless,” Rush said.

He said his son’s mother uttered a “primal scream” that he would never forget. 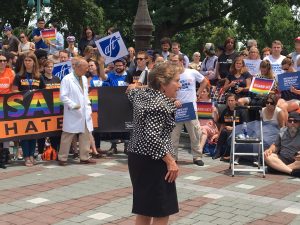 Schakowsky said she was constantly approached by constituents who had lost family members to guns. She thought the momentum of the sit-in would finally bring a “tipping point” to congress with pressure from constituents.

“This is it. This is our issue. We own it in a big way,” Schakowsky told her fellow Democrats. “People come up to you at the grocery store and the gym and farmers market. People are saying, ‘Do something about guns,’” she said. “There is not a district in this country, not a member in this chamber who hasn’t had a constituent with a family member lost to unnecessary gun violence.”

Kelly, along with Chicago Democrat Mike Quigley (10th Dist.) had tried earlier in the month to introduce legislation lifting the ban on the federal study of gun violence by the Centers for Disease Control.

“We need the best data available on the impact gun violence has on our communities, our nation’s public health, and on our economic future,” Kelly said. Kelly’s chief of staff carried a poster during the sit-in with faces of Chicagoans killed by firearms. She tweeted during the sit-in: “I was 1st on the House floor and I’ll be the last to leave.”

Congressman Bill Foster (Naperville, 11th Dist..), who represents parts of Kane, DuPage and Will counties, joined other Illinois Democrats on the floor and outside on the Capitol steps with Minority Leader Nancy Pelosi (D-California). Foster called gun violence “a public health crisis.” A former physicist at Fermilab, Foster issued a statement on his website:

“In the wake of the deadliest mass shooting in American history, we’ve reached a moment of truth for our nation. As a scientist, I always look at the facts, and gun violence is a public health crisis. It is time we act to stop it. You don’t have to be a scientist to know that universal background checks are a fundamentally good idea. And you don’t have to be a scientist to understand that anyone who belongs on the no-fly list should not be able to purchase firearms. It is time for Congress to pass legislation to address gun violence.” 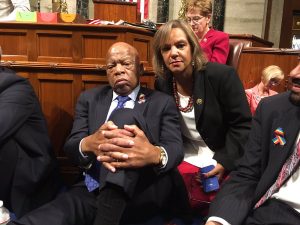 Chicago Congresswoman Robin Kelly was among the first to sit down on the House floor with Georgia Congressman John Lewis. (Photo courtesy Rep. Robin Kelly Twitter)

“Americans want this vote on gun violence. Do not silence my constituents,” she posted on her website.

“I’m proud to join Congressman John Lewis and dozens of my colleagues as we sit in on the House Floor today. We have had enough. I’m tired of seeing children who are sitting in their living rooms or bedrooms killed by bullets coming through the windows and walls of their homes. It is absolutely horrific.

It is simply not acceptable that we continue to allow people to be mowed down in their homes, in their places of worship or even when they’re out having a good time on a weekend. We can work to end this violence with common sense gun legislation. But to do that, the House needs to take action. The fact of the matter is all we’re asking for is a vote.”

But some rural, Republican, congress members did not find the sit-in effective.

“The reality is that any bill can be brought to the floor for a vote by obtaining the signatures of 218 Members of Congress – a simple majority of the House. There is no need for political stunts like this,” Shimkus said in an email.

In a June 16 radio interview, Shimkus called the “No Fly-No Buy” legislation a “political sound bite” that was fueled by “the fear that is out there,” after the Orlando, Florida shootings. He said his constituents would object to anyone being denied a gun without due process.

“There will be some moderate districts that [gun restrictions] may catch hold,” he said. “In rural America we value our Second Amendment rights and we value due process. You can’t deprive people of life liberty and property without due process.”

Shimkus has received more than $4,500 in donations from “gun rights” PACs including the National Rifle Assn. between 2014-2016, according to the political campaign website Opensecrets.org.

Shimkus’s protégé, Rodney L. Davis (R-Taylorville, 13th Dist.) received the most money from gun-rights PACs over the past four years, according to Opensecrets.org. Davis represents constituents in McLean County.

In 2012, Davis, staffer for Shimkus, took over the seat of retiring Congressman Tim Johnson, narrowly winning by around 1,000 votes. In 2014, Davis received $14,450 from gun rights PACS. He got another $4,500 from the NRA in 2015-16. Davis did not respond to requests for comment about the sit-in. But he has made his support of gun rights known.

“I am an unabashed supporter of our Second Amendment rights,” he wrote on his campaign website in 2014. “In Congress, I will be a fierce supporter of the rights of gun owners and sportsmen.” 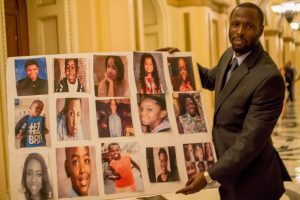 “We have a constitutionally protected right to keep and bear arms and it must be preserved and defended at all levels of government,” Bost said on his 2014 campaign website.

Other Republicans in Illinois have received NRA contributions, according to Ppensecrets.org. Republican Adam Kinzinger of Channahon, who represents voters in Winnebago and DeKalb counties in addition to Will, received a total of $8,000 since 2014.

But not all rural congress members receive money from the NRA.

Even though she’s a gun-owner herself, and married to a police officer who carried a gun both on- and off-duty, Cheri Bustos, the unlikely Snapchat celebrity, said she was happy to join her colleagues on the floor of the House.

Bustos said in an early-morning speech Thursday that her grandmother was a nurse in a gun company, her father was a hunter and her three sons competed in tournament shooting.

“This is a district where people like their guns, with hunters and outdoorsmen and women,” Bustos said.

Bustos said during the sit-in she received messages of support from constituents who had friends and family members killed by guns.

“With the people back home and the people outside, there are many, many people out there showing support. I’ve gotten unbelievable texts and phone calls like all of us have.”