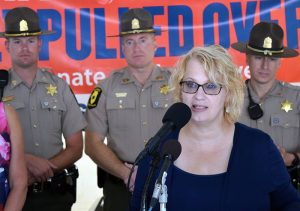 Priscilla Tobias, director of program development for the Illinois Department of Transportation, speaks during the observation marking the 20th anniversary of Illinois’ .08 DUI law at the Illinois State Fair on Aug. 18. (Photo courtesy of IDOT)

The Illinois Department of Transportation and Illinois State Police joined members of Mothers Against Drunk Driving and the Alliance Against Intoxicated Motorists last week to remind motorists of the importance of driving sober, 20 years after Illinois’ implementation of its 0.08 DUI legislation.

“Illinois’ 0.08 law is a vital part of the effort to end drunk driving on Illinois roads,” said Priscilla Tobias, IDOT’s director of program development. “Alcohol-impaired motor vehicle crash fatalities have declined significantly over the last two decades, but we are nowhere near making drunk driving a thing of the past. It continues to shatter hundreds of lives each year in Illinois, and that is simply unacceptable.”

The law lowering Illinois’ DUI threshold to a blood-alcohol concentration of 0.08 took effect July 2, 1997, when Illinois became the 15th state to enact such a law. Today, all 50 states, the District of Columbia and Puerto Rico have a legal limit of 0.08 or lower.

George and Marilyn Murphy of Jacksonville lost their 24-year-old daughter, Kellie Murphy Wheatley, to a drunk driver on July 4, 1984. The couple worked vigorously for the passage of Illinois’ 0.08 law and continue to partner with MADD to help others avoid the tragedy their family experienced.

“Illinois’ 0.08 law is one of the greatest lifesaving pieces of legislation to become law,” George Murphy said. “Today, more people decide against getting behind the wheel after drinking, which has prevented countless tragedies.”

As Labor Day approaches, state and local law enforcement will be reminding motorists of the importance to drive sober and ramping up enforcement efforts through a “Drive Sober or Get Pulled Over” campaign. Beginning Aug. 21 through Sept. 5, the traveling public can expect to see roadside safety checks throughout the state and increased patrols for impaired drivers and seat belt law offenders, all to reduce motor vehicle fatalities and injuries.

“This Labor Day is especially noteworthy because of the recent 20th anniversary of the 0.08 law. This law was enacted to reduce DUI-related traffic crashes and has saved many lives, but there is still more work to do,” said Illinois State Police Director Leo P. Schmitz. “Driving under the influence continues to be a significant cause of serious injury and fatal traffic crashes. During the upcoming holiday weekend, IDOT, ISP and other law enforcement agencies will work together to remove impaired drivers from Illinois roadways. If you drink and drive, you will be arrested. Drive Sober or Get Pulled Over.” 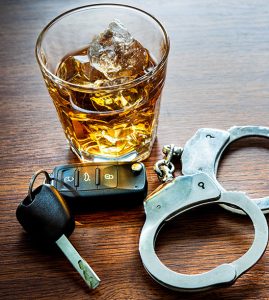 Some steps to avoid a tragic crash or an impaired driving arrest:

“Drive Sober or Get Pulled Over” is supported with federal highway safety dollars, administered by IDOT and supported by the Illinois State Police and local law enforcement agencies throughout Illinois.