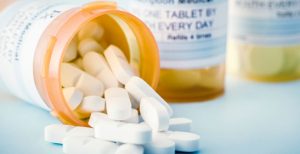 Health officials estimate more than 1,900 people in Illinois are expected to die of opioid overdoses this year.

The Illinois Department of Human Services (IDHS) is receiving $16 million in federal funding to continue its efforts to combat the opioid crisis.

Opioid deaths are rising across the country, according to the Centers for Disease and Prevention, which reports more than 63,600 opioid overdose deaths in 2016. There were just over 2,000 opioid related deaths reported in Illinois last year.

It’s the second year in a row that Illinois has received the funding, which is awarded through the 21st Century Cures Act and administered through IDHS’ Substance Abuse and Mental Health Services Administration under the State Targeted Response to the Opioid Crisis Grant program.

The grant will support new treatment and recovery services, expanded medication-assisted treatment for individuals with opioid use disorder, opioid-related enhancements to the Illinois Prescription Monitoring Program (PMP), programs to connect individuals experiencing an opioid overdose from hospital emergency departments to services in the community, and pre-release and post-release services for individuals who are incarcerated in county jails.

The award will allow continued training for first responders, who play a critical role in saving lives and administering Naloxone to individuals that are experiencing an opioid overdose.

State-funded community-based organizations have trained 17,675 people so far during the the state’s fiscal year. Nearly 900 lives have been saved as a result of this training and through the distribution of Naloxone.

“Illinois continues to be severely impacted by the opioid epidemic and this grant allows us to strengthen our state-wide services and expand access to treatment and overdose prevention programs in Illinois,” IDHS Secretary James Dimas said. “We look forward to supporting new programs and services in areas that have been most effective.”

Dimas urges anyone who is looking for information about opioids and treatment resources to call the state’s Opioid Helpline at 1-833-2FINDHELP.