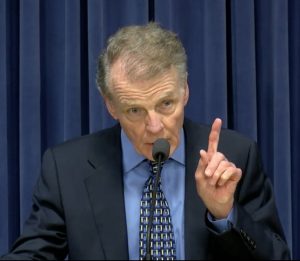 House Speaker Michael Madigan and the Democrats are looking to convince a handful of Republicans to break ranks and vote to override Gov. Bruce Rauner’s amendatory veto of Senate Bill 1, which is expected to take place Aug. 23. (Blueroomstream)

It continues to be a numbers game as a vote is scheduled for this week on overriding the governor’s veto on school funding.

Can House Speaker Michael Madigan and the Democrats convince a handful of Republicans to break ranks and vote to override Gov. Bruce Rauner’s amendatory veto of Senate Bill 1, which creates a new state-funding formula for schools? Will lawmakers opt for more money for their local schools now with the risk of that funding shrinking later when the funding formula shifts?

Because Rauner’s plan provides more money for schools now than Senate Bill 1 does, lawmakers outside of Chicago may be hard-pressed to justify voting against the governor’s amendatory veto according to one political observer.

“It’s a fact that the amendatory veto provides more money for districts than Senate Bill 1 does,” said Ted Dabrowski, vice president of policy for the Illinois Policy Institute.

The Illinois Senate, which has a Democratic super-majority, has already approved the override, putting all the focus — and drama — on the House.

Steve Brown, spokesman for Madigan, anticipated that an override vote in the House would take place Aug. 23.

Brown had no projection as to how the override vote would play out.

“I wouldn’t want to make a prediction on the vote at this point,” Brown told Chronicle Media.

Dabrowski also said it is tough to read the tea leaves at this point, with so many factors and issues in play, such as schools getting ready to open or already opening, and political leaders not wanting to be blamed for schools not getting needed money, especially in poorer districts.

The spokesman for the Illinois Policy Institute, which has a more conservative tilt, said it isn’t right that the House passed a $36 billion spending plan that includes $5 billion in new taxes and purposely withheld education funding until the time when schools have opened or are about to open.

“They are holding kids as pawns. That’s not fair,” Dabrowski said.

Dabrowski said if the override fails, he would recommend going back to the existing school-funding system until something can be worked out to change the formula. He said that would be better than jeopardizing money for financially strapped districts across the state.

He said with both Rauner and Madigan cranking up the war of words regarding school funding, many citizens don’t know enough about the funding formulas proposed under Senate Bill 1 and the amendatory veto.

“I don’t think people understand it,” Dabrowski said of Senate Bill 1. “It is extremely complex and very political. They should know that the amendatory veto is more fair. If their lawmakers vote for SB 1, they are voting for a bailout for Chicago public schools over their own constituents. If the override fails, they should go back to the drawing board.”

Rauner has called SB 1 a bailout for Chicago public schools as well because it carves out certain funding mechanisms, such as a block grant, just for CPS.

Brown said independent agencies, such as Politifact.com and the Better Government Association have proven such allegations are incorrect.

“I don’t know why anyone would still be making that argument,” Brown said.

Contrary to the Illinois Policy Institute, the Center for Tax and Budge Accountability, which has a more leftist tilt, contends that amendatory veto would harm Illinois schools in the long run.

“The bottom line here is clear,” the CTBA said in a fact sheet on the amendatory veto. “The school funding formula created under the amendatory veto is fatally flawed, creates an education-funding system that will be inadequate in amount, inequitable in distribution, and not actually tied to the evidence of what works. These are the same flaws that exist under Illinois’ current formula, which has created one of the least adequate and most inequitable education-funding systems in America. SB 1 is the only path to an education-funding formula that: is tied to the evidence of what works, identifies the actual investment needed to educate all children to succeed academically, and equitably distributes new state resources invested in education over time to school districts across Illinois.”

CTBA officials note that an “adequacy target,” representing the dollar amount that evidence indicates is needed to cover the costs of enhancing student achievement, is part of SB 1. They note that under the amendatory veto, funding would switch to per-pupil in 2020, regardless of whether a district was at its adequacy target or not.

“Obviously, once this change kicks in, many school districts will lose education funding, even if they have less than what the evidence indicates they need to educate the children they serve,” the CTBA said. “Hence, under the amendatory veto, school districts will be moved farther away from reaching adequacy when their student populations decline — a highly undesirable and inequitable outcome.”