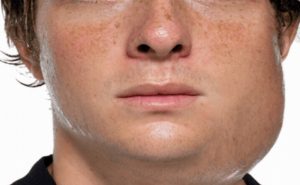 In addition to puffy cheeks and swollen jaw, the most common symptoms of mumps are also fever, headache, tiredness and loss of appetite. (Photo courtesy of the CDC)

Cleaning crews were busy scrubbing and sanitizing classrooms and common use areas of Lewis University in Romeoville , where a mini-outbreak of mumps was reported on Dec. 4.

When Lewis students, staff and faculty broke for winter vacation on Dec. 14, there were five confirmed and eleven probable cases of mumps among the students, according to Joseph Falese, senior vice president of student services for Lewis University.

“We kind of thought the numbers were going to go up a little bit and then level off, and now we expect them to have a downward trend,” Falese said. “The students finished their classes and final exams. We had to reschedule our graduation ceremony and programs, which were supposed to be last weekend. The campus has emptied out and we are doing an extensive cleaning of the campus in preparation for the faculty and staff coming back in early January and the students after that.”

Falese said efforts to clean the university’s dormitories and other areas were being performed by the campus foodservice and housekeeping company, Sodexo, beginning on Dec. 17. Once an “extensive” cleaning is conducted by Sodexo, an independent cleaning service will be contracted for additional cleaning in heavy-traffic areas used by students. “We basically closed the university at 3 (in the afternoon) on Friday the 21st, and both phases of cleaning will be completed in advance of the Jan. 14 start of classes,” he said.

According to Will County public health officials, Lewis University was still in “outbreak status” for mumps as of Dec. 18, Falese reported. He could not comment on whether any Will County residents other than Lewis University students had been confirmed with mumps, which is an acute infectious viral disease that can cause swelling and tenderness of the salivary glands in the cheeks and jaw.

“We have mumps cases across the state each year. This outbreak is nothing like the outbreak at the University of Illinois in Urbana in 2015-16,” said Melaney Arnold, public information officer for the Illinois Department of Public Health (IDPH). Outbreaks occurred on several campuses, including the U of I, during the 2015-16 school year. The two largest outbreaks were from Iowa and Illinois and affected several hundred university students, according to the Center for Disease Control (CDC). 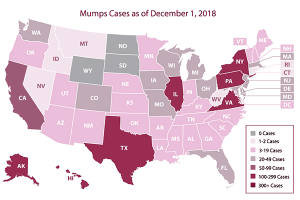 Illinois reported some of the highest number of mumps cases across the United States in 2018. (Graphic courtesy of the CDC)

In addition, several outbreaks affiliated with universities were reported in multiple states during 2014. An Ohio outbreak linked to a university involved over 400 people. An outbreak affecting the National Hockey League occurred the same year.

In 2016-17, a large outbreak in a close-knit community in northwest Arkansas resulted in nearly 3,000 cases, the CDC reported.

“A major factor contributing to outbreaks is being in a crowded environment, such as attending the same class, playing on the same sports team, or living in a dormitory with a person who has mumps,” notes the CDC. “Also, certain behaviors that result in exchanging saliva, such as kissing or sharing utensils, cups, lip balm or cigarettes, might increase spread of the virus. In recent years, outbreaks have occurred in schools, colleges, and camps.”

The MMR (mumps, measles, rubella) vaccine prevents most, but not all, cases of mumps and complications caused by the disease. This led the U of I to initiate a vaccination drive following the 2015-2016 outbreak there and at other universities.

While the 2018 outbreak at Lewis University may not result in a major vaccination drive, health officials in Will and surrounding counties are cautioning students and others without MMR vaccinations to contact their physicians during winter break.

There are currently no cases of mumps in Kendall County related to the Lewis University outbreak, according to RaeAnn VanGundy of the Kendall County Health Department in Yorkville.

“We continue to monitor and educate families of students coming home from universities about how to watch for signs and symptoms of mumps,” she said. “They need to pay special attention to any kind of cough or other signs. They should first call their primary care physician and alert them of possible mumps. Call before you go in, because it is very infectious and your primary care office will want to know you are coming.”

Data supplied by the IDPH reflect around 1,500 reported cases of mumps in Illinois from 2013 to Dec. 18, 2018, including 271 cases reported this year. “That number is provisional and likely to change,” said Arnold.

Before the U.S. mumps vaccination program began in 1967, around 186,000 cases of mumps were reported each year, though the CDC believes the number was higher due to underreporting. Since the development of the vaccine, there has been a more than 99 percent decrease in mumps cases in the United States.

Still, large, multi-state mumps outbreaks do occur; many of the 6,366 cases of mumps reported in the U.S. during a particularly virulent 2006 outbreak originated in isolated settings such as college campuses, according to the CDC.

Adults should get the MMR vaccine if they are a student beyond high school, work in a hospital or other medical facility, travel internationally, are a passenger on a cruise ship, or are a woman of childbearing age who has not had the vaccine, the IDPH advises.