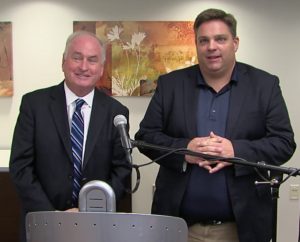 State Rep. Dan Brady (left) (R-Nomal) and state Sen. Chapin Rose (R-Mahomet) have proposed an overhaul of Illinois’ higher education system, including creation of a uniform admission application for all public universities in the state and ensuring any high school student with a ‘B’ average automatically is accepted to an academically appropriate public university in Illinois. (BlueRoomStream.com)

Two state lawmakers are looking to stop the exodus of college students from Illinois.

State Sen. Chapin Rose (R-Mahomet) and state Rep. Dan Brady (R-Nomal) have proposed an overhaul of Illinois’ higher education system, including creation of a uniform admission application for all public universities in the state and ensuring any high school student with a ‘B’ average automatically is accepted to an academically appropriate public university in Illinois.

The lawmakers point out that between 1991 and 2014, enrollment at Illinois public universities and community colleges declined by 50,000 students. Since the 1960s, Illinois has been a net negative exporter of college students, according to the National Center for Education Statistics.

“We have world-class colleges and universities in Illinois, yet more and more Illinois students choose to leave our state to continue their education,” said Brady, spokesman for the state House Appropriations Higher Education Committee. “This brain drain can’t continue. With this legislation, we’re offering real solutions that will help us keep our best and brightest here to get their degree and, hopefully, to put their talents to work in our communities.”

In 2000 alone, Illinois lost 4,781 students to other states, equivalent to an estimated lifetime loss of $776 million in tax revenue to the state, according to the report “Estimating the Economic Impact of College Student Migration from Illinois.”

“The structural problems of higher education far transcend the last couple of years during the budget impasse,” Rose said. “Every student we lose is another student who will most likely take their talents and knowledge elsewhere, hurting Illinois in innovation, jobs and economic impact. This drain of students is a direct drain on the state. 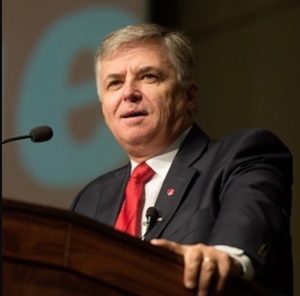 “This legislation is a thoughtful and methodical approach to reform, but make no mistake, higher education in America is facing unprecedented challenges and changes are needed for a strong and dynamic vision for our cherished institutions. We must carefully, but swiftly, move to protect our strengths.”

Rose and Brady said their legislation would make the state’s higher education system more efficient, having each university focus on its strengths.

Rose cited the University of Illinois recently adding an $82.6 million Science, Technology, Engineering and Math building for its Springfield campus when the “crown jewel” of the state’s higher education system, the U of I’s engineering and science program, is in Champaign-Urbana.

“We need to start by protecting what we already have, not reinventing the wheel,” Rose said. “Not to mention that several other universities in Illinois with higher-ranked STEM programs that UIS have been awaiting new science buildings themselves.”

Rose, who has several higher education institutions in his district including the University of Illinois, Illinois State University and five community colleges, said state education funding as it is now “doesn’t play to the strengths of the schools.”

Brady and Rose said the legislation to improve the higher education system is certainly open for discussion.

“This is the beginning of the conversation. It is not the end all or be all,” Rose said. “It is designed to jump-start something on behalf of higher education institutions.

“We have to make higher education more affordable and accessible, and encourage more Illinois students to continue their education here at home,” Brady said.

Enrollment numbers from the Illinois Board of Higher Education show that the state’s 12 public universities lost 4,085 students between Fall 2015 and Fall 2016, including a decline of 1,100 students at Chicago State University and 1,245 students at Eastern Illinois University.

Only four of the 12 state universities — Illinois State and the three University of Illinois campuses — Champaign, Chicago and Springfield — showed any enrollment increases between Fall 2015 and Fall 2016.

Amidst the gloom surrounding the numbers, there are pockets of hope. This year’s freshman class at NIU increased in size for the first time in six years; and SIU Edwardsville’s School of Nursing posted a record enrollment. This fall was also SIU Edwardsville’s ninth-largest enrollment ever.

“Considering the market forces at play within Illinois that were outside our control during the past two years, we are encouraged by the confidence that students and their families continue to display in SIUE,” school Chancellor Randy Pembrook announced on the school website. “Initial data for next year’s class is encouraging, and we have initiatives in place to enhance enrollment growth in the future.”