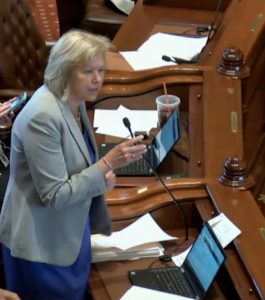 State Sen. Julie Morrison (D-Deerfield) talks about her legislation aimed at improving the way sex assault and rape victims are treated at hospitals. Her legislation also requires hospitals to keep records in sexual assault cases for at least 20 years.

Victims of sexual assault and rape would be assured prompt medical treatment, according to legislation pending in the state House.

State Sen. Julie Morrison (D-Deerfield) passed her plan to improve medical care for survivors of rape and sexual assault out of the Senate last week.

“After survivors have endured one of the most traumatic experiences anyone can ever live through, it is vital hospitals and their staffs are prepared to treat them with the utmost care,” Morrison said. “No victim should ever feel re-traumatized by seeking medical attention. In order to heal and seek justice against their perpetrator, victims must receive top-notch care by trained and compassionate medical personnel.”

House Bill 5245 is a package of reforms meant to expedite the overall medical care of sexual assault survivors. The proposals would ensure survivors of sexual assault receive medical treatment within 90 minutes of arriving at a hospital and also that medical personnel are trained to perform rape kits and other examinations needed after a sexual assault.

Illinois Attorney General Lisa Madigan championed the proposal after increased attention has been drawn to the issue of untrained medical professionals treating survivors of sexual assault.

“Providing specialized medical care to survivors is known to help them heal, increase their willingness to pursue justice and increase the number of successful prosecutions against offenders,” Madigan said. “We must do better for the thousands of women, children and men in Illinois who are victims of sexual assault every year.”

The bill passed in the Senate on Friday without opposition and will head to the House for a vote before being sent to the governor.

“The state of Illinois is going to be a leader in this field, caring for victims in the medically competent way, as well as being able to further the justice system the victims need to be able to access,” Morrison said.