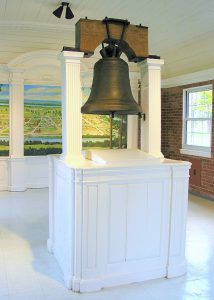 The 100 Day Countdown to the Bicentennial Celebration will kick off at the first state capitol in Kaskaskia. Free festivities will take place on Constitution Day Aug. 26 in front of the Liberty Bell of the West. (Photos courtesy of Illinois 200)

A 100 Day Countdown to the 2017-18 Illinois Bicentennial Celebration will kick off Aug. 26 ‒ Illinois Constitution Day — at the site of the state’s first capital: Kaskaskia Island in Randolph County.

Events are planned that day in front of Kaskaskia Island’s “Liberty Bell of the West” and along the Kaskaskia Cahokia Trail; generally 12considered the first road in Illinois.

“We are very excited that the governor’s office has selected our historic region to begin the 100 Day Countdown to the Bicentennial Celebration,” Randolph County Commissioner Dr. Marc Kiehna said. “Since Randolph County is ‘Where Illinois Began,’ it is appropriate for festivities to start on Kaskaskia Island — the site of the first state capital of Illinois.”

Events begin at 9 a.m., with a gathering of state, county and local officials, as well as state historians, for a ceremonial signing of the 1818 Illinois Constitution.

The ceremony and document signing will be held in front of the state’s first courthouse, located near the Mississippi River Island’s Liberty Bell of the West shrine.

At the completion of the ceremony, the group will proceed on the Kaskaskia/Cahokia Trail; stopping at the Pierre Menard House in Ellis Grove to recognize the home of the first lieutenant governor of Illinois.

The Fort de Chartres State Historic Site, near Prairie du Rocher, will be the next stop on the trail; with tours of the fort’s powder magazine —generally considered the oldest building in Illinois – from noon to 3 p.m., and a special flag raising ceremony at 2 p.m. The flag raising will be accompanied by the firing of antique cannons and a parade of military reenactors with period weapons and army uniforms.

The trek along the trail, through three counties, will conclude at Cahokia that evening at Cahokia — the first permanent European settlement in Illinois.

All of the bicentennial kick-off events will be free and open to the public. Food and refreshments will be available at the Kaskaskia and Fort de Chartres events.

Officials are also planning at least one state Constitution Day event in every major region in Illinois. However, the Kaskaskia area events will stand out, according to Bicentennial Commission Co-Chair and Southern Illinois University System President Randy Dunn.

“As a resident of Randolph County for over 10 years, I’m proud that one of the state’s very first bicentennial events will take place at Kaskaskia, our first capital. The area is so closely intertwined with the history of Illinois, and it will be exciting to be part of this celebration,” Dunn said: 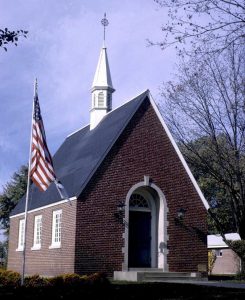 The 100 Day Countdown to the Bicentennial Celebration will kick off at the first state capitol in Kaskaskia. (Photos courtesy of Illinois 200)

The Bicentennial Celebration itself will begin Dec. 3 —the date on which Illinois was formally recognized as by Congress and joined the United States — with events in Springfield and Chicago.

During the intervening 100 Day Countdown, Illinois counties and municipalities will be asked to begin flying a new Illinois Bicentennial Flag —provided to all 102 counties and 1,300-plus municipalities by the Illinois Municipal League. Videos on state history, produced by Illinois high school and college students, will be posted daily on the state bicentennial’s website —www.Illinois200.com; as well as on Illinois200 social media platforms, and the web sites of sponsor organizations and businesses such WGN Radio.com and SJ-R.com.

The Illinois Bicentennial Commission will partner with local entities over the coming months to promote a range of “geographically and culturally diverse events, from festivals and parades to conventions, and awards ceremonies” across the state, according to the commission website.

The Bicentennial Commission also hopes to encourage investment in all areas of the state through its #IllinoisProud Awards — “the signature legacy project for the Illinois Bicentennial celebration,” according to the website.  Commissioner plan to award grants of to $50,000 for community projects in every Illinois county, to “Everyday Heroes” who submit video applications online. Funding will be raised through corporate donations, according the commission website.

The commission has requested all Illinois counties to appoint bicentennial liaisons to help coordinate activities.

The Illinois Bicentennial Celebration is scheduled to wrap up on Dec. 3, 2018, with a 200th Birthday Gala at the United Center in Chicago.

Established a frontier outpost, Kaskaskia, prior to the American Revolutionary War, was an administrative center for the British Province of Quebec. It was named capital of the United States’ Illinois Territory, created on February 3, 1809. In 1818, when Illinois became the 21st U.S. state, Kaskakia was named the state’s first capital — a title it held until 1819, when the capital was moved to Vandalia.