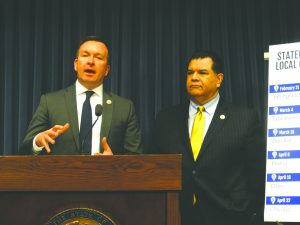 State Sens. Andy Manar (left) and Martin Sandoval will hold a series of public meetings around the state to gather input from local communities about their infrastructure needs as the committees they chair begin putting together a long-range, multi-billion-dollar capital improvements package for Illinois. Manar (D-Bunker Hill) and Sandoval (D-Cicero) held a news conference Thursday at the Capitol in Springfield. (Capitol News Illinois photo by Peter Hancock)

SPRINGFIELD — Illinois lawmakers were given a rude awakening on Thursday, Feb. 21 about the condition of the state’s roads and bridges as they began preparing to put together what is expected to be a multi-billion-dollar, long-term capital improvements plan.

Matt Magalis, acting secretary of the Illinois Department of Transportation, laid out just some of the numbers to a Senate panel that’s been tasked with putting together a plan.

“We currently have 79 million square feet of bridges requiring maintenance and updates,” he said. “That’s over 730 state bridges. We also have a need over the next 10 years of additional funding of $13-15 billion for our highways. That is just maintenance. We also have a need for capacity (highway expansion) that is in the billions of dollars.”

In addition to highways, Magalis said there is a long list of needed upgrades for other forms of transportation: $250 million in state funds for airports around the state, not including Chicago’s O’Hare and Midway airports; $19.1 billion for public transit; $800 million for passenger rail; and $4 billion for freight rail.

Also, Margalis said, locks and dams along the state’s waterways, which carry a significant volume of freight, are facing costs in the “hundreds of millions of dollars.”

In addition to transportation infrastructure, the Senate panel heard Thursday from community college and university officials who say they are grappling with a backlog of long-deferred maintenance projects to their buildings and other campus facilities.

Still, highways and bridges are likely to draw the most attention as lawmakers put together a capital plan because, according to Magalis, many are nearing the end of their useful life, especially interstate highways that date back to the 1960s, and the 730 bridges for which the state is responsible, many of which date back to the 1970s.

“Unfortunately, as you can tell traveling around our state, our infrastructure continues to deteriorate faster than we can maintain it,” Magalis said.

Putting together a financial package to address all, or even most, of those needs would be a challenge anywhere in the United States. But it will be especially difficult in Illinois, which already carries a heavy debt load and is looking to take on more, and whose bond rating with Moody’s Investor Services is just one notch above junk status.

Sen. Andy Manar (D-Bunker Hill), who chairs one of the Senate’s two appropriations committees, conceded that the state will need to find new revenue to pay for any new bonds that are issued to fund another capital plan.

“Any time that the state issues debt, there has to be a dedicated revenue stream,” he said during a news conference Thursday following the committee hearing.

That could mean higher motor fuel taxes, higher sales taxes, or some other form of revenue.

Manar was joined at the news conference by Sen. Martin Sandoval (D-Cicero), who chairs the Senate Transportation Committee. He said Illinois might have to look beyond motor fuel and sales taxes and focus on other, more creative ways to finance a capital plan.

“There have been other novel ideas that have been floated out there over the last couple of months to finance a capital bill,” Sandoval said. “I think we are also going to invite academia to come forward. Academia, business, industry, all the policy think tanks that have had reports out since 2009 – they need to come forward today.”

But simply fixing the state’s roads, bridges, public buildings and other infrastructure is not the only priority of a capital bill, Manar and Sandoval said. Both also said they will make it a top priority to ensure that minority- and women-owned businesses receive a proportional share of the contracts that are awarded.

“We’re going to rebuild Illinois, improve Illinois, but we’ve got to (have) a diverse group of men and women to do the work,” Sandoval said.

Manar and Sandoval co-chaired Thursday’s hearing in the Capitol. But they said that was only the first of several public hearings they have planned to solicit public input about the state’s infrastructure needs.

Over the next several weeks, they have scheduled a series of five more public meetings around the state in which they will solicit input from local officials about their needs.

The dates and locations of those hearings are:

More information about times and locations will be available at a later date, according to Manar’s office.