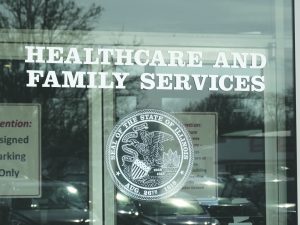 SPRINGFIELD — Officials in charge of managing the Illinois Medicaid program told state lawmakers they are focused on improving services and reducing the program’s cost to taxpayers, but that will depend on whether lawmakers are willing to impose a new tax on insurance companies.

“This budget proposal has been referred to technically as a maintenance budget, but to us that means far from business as usual,” Theresa Eagleson, the new director at the Department of Healthcare and Family Services, told a Senate appropriations committee Tuesday. “The governor has vowed to preserve Medicaid funding, and under this budget not a single person will see their health coverage or their child support assistance reduced in any way.”

Gov. J.B. Pritzker is proposing a total operating budget for DHFS of $25.1 billion, or about $900 million more than the current year’s budget. The vast majority of that is for the state Medicaid program, which is jointly funded with state and federal money to provide health coverage to more than 3 million low- and moderate-income people in Illinois.

However, under Pritzker’s proposal, the cost to Illinois taxpayers would actually be about $700 million less than it is this year. That’s because within the Medicaid program, Pritzker is proposing to levy a host of new taxes that would go into a special fund used to reimburse health care providers while at the same time drawing down additional federal matching funds.

Those new taxes include an assessment on certain insurance companies known as managed care organizations, or MCOs, which are the type of companies that now administer most of the state’s Medicaid program. Pritzker is also seeking a 32-cent per-pack increase in the state’s cigarette tax as well as new taxes on e-cigarettes.

Among the things the new money would pay for would be the hiring of 59 additional staff members to coordinate physical and behavioral health care for Medicaid patients.

That new “managed care” system, however, has been the subject of intense criticism since it was implemented statewide in 2015. Known as “Health Choice Illinois,” it was intended to improve health outcomes and bring down costs by coordinating each individual’s care between their primary care provider and various therapists and specialists.

Sen. Heather Steans, a Chicago Democrat who chairs the committee, was among the group of lawmakers who pushed for shifting to a managed-care model for Medicaid. But she said Tuesday that there have been signs the new model isn’t working as planned, and that the MCOs have actually been controlling costs by denying claims.

“The history we’ve had with the MCOs has been much more (about) denials, not providing care,” she said.

Eagleson, a former executive director of the Office of Medicaid Innovation at the University of Illinois system, acknowledged earlier in her testimony the agency was “deeply aware” of concerns about denial rates, late payments and other issues in the program. But she also said there are indications managed care is achieving some of its goals.

“… We’re seeing anecdotally things like increased assessments of behavioral health needs, decreased hospital admissions, decreased (emergency room) utilization,” she said. “So we do think that the statistics are going in the right direction in most cases, but we’d like to bring more transparency to you around those issues as well.”

Sen. Laura Murphy, a Democrat from Des Plaines, meanwhile, said there were concerns that go beyond the managed care system, and that’s the difficulty people have getting recertified for Medicaid in order to continue their benefits after their initial period of approval expires.

“I’m sure my office is not unlike most other districts’ offices, where 90 percent of my staff’s time is spent on trying to get people recertified,” she said, calling the process “the most consumer-unfriendly thing we could possibly do.”

“And the amount of frustration that my constituents, and I’m sure everyone’s experienced, it is beyond unacceptable,” Murphy said.

Eagleson said the agency was working “across the board” to find solutions to that problem, including hiring and training new staff at local offices where Medicaid applications are processed. She said the agency was also looking into a more streamlined process for the frail elderly and people with chronic disabilities whose medical conditions that qualify them for Medicaid are unlikely to change.

Sen. Dale Righter, a Republican from Mattoon, said his major concern about the budget request was the reliance on new taxes, which the General Assembly has not yet approved. He asked how the agency would make up the difference if lawmakers decline to enact those new taxes.

“We would have to explore other funding options for the budget, senator, whether that would be (general revenue funds) or other resources,” said Mike Casey, DHFS finance director. “We would have an issue of funding our budget, to the tune of approximately $400 million, net.”

The committee took no action Tuesday, but will continue discussing the proposed Medicaid budget as lawmakers work toward passing a final budget later in the session.