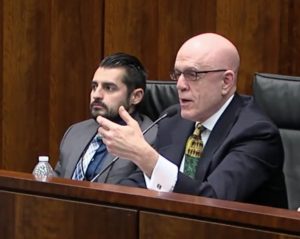 State Rep. Greg Harris (right) said it is concerning when Medicaid managed care providers in the state continue to suffer losses in the hundreds of millions of dollars each year. (Blueroomstream)

Concerns are being raised that the Illinois Medicaid system could be heading into dangerous territory, especially because the actuarial firm helping to set the payment rates has run into financial snags in other states.

Milliman, a provider of actuarial and related products and services, has been part of setting the rates for the Iowa Medicaid system, which has collapsed after one-third of Medicaid service providers dropped out of the program.

State Rep. Greg Harris (D-Chicago) said Milliman has just had a horrible experience with managed care organizations who complained about being drastically underpaid, which is also the case in Illinois. Various MCO representatives, he said, referred to Iowa as a “catastrophic experience.”

Robert Damler, a principal and consulting actuary with Milliman, assured state officials at a hearing last week that Illinois’ Medicaid system is not the same as Iowa’s.

“In Illinois, the way the (Medicaid) program was developed is different,” Damler said.

Milliman was also named in a Tennessee class-action suit accusing Wachovia and other participants in a scheme to hide the downfall of the re-insurer Reciprocal of America in 2012. Harris noted that Milliman paid out $5.2 million as part of that settlement.

The Seattle-based company is also blamed for providing wrong actuarial information to the Detroit pension systems which are now in bankruptcy. Milliman allegedly calculated a required $111 million balloon pension payment in 2024 after projecting the life expectancy of city retirees based on old mortality tables. The balloon pension payment is now forecast at more than $491 million.

Ross Winkelman, a principal and vice president of the Denver officer of Wakely Consulting Group, which provides actuarial information to the Illinois Association of Medicaid Health Plans, said losses for Medicaid service providers in Illinois are expected to be between $114 million and $345 million for 2018. He said the losses will be driven in large part by the Medicaid family health plan, serving mothers and children.

He believes that there should be increases in Illinois’ Medicaid capitation rates.

“We don’t understand how these losses could be continuing to occur and these rates considered to be appropriate,” Winkelman said last week at a hearing of the state House’s Human Services Committee.

According to Milliman, Winkelman said, managed care organizations should be able to spend 86 percent of Medicare dollars on medical expenses and be able to break even. He said the average of medical-related expenses for MCOs is 97 percent and one firm was at a whopping 114 percent.

“All of these health plans and all of this financial incentive to perform well and to make money and none of them can make money,” Winkelman said. “And not only can they not make money, they are, on average, 10 percent higher (than Milliman’s numbers).”

Damler said that hundreds of hours go into the examination of health care histories in a state and proposing Medicaid reimbursement rates.

He said Illinois MCOs seeking to be Medicaid service providers were allowed to bid between a 4 percent increase and a negative 0.2 decrease.

“On average, they all did about a 1.5 percent rate increase,” Damler said of the Illinois Medicaid service providers.

Illinois is expected to pay out $60 billion in taxpayer money to Medicaid service providers in the next four years.

Harris said it is concerning when Medicaid managed care providers in the state continue to suffer losses in the hundreds of millions of dollars each year.

The state rep said a number of plans still feel Illinois’ Medicare payments are insufficient to keep them solvent and operating in the Illinois marketplace.

Harris said he was surprised to hear that Milliman had not gone over the numbers more with individual managed care organizations.

“When this stuff is so complicated and when the stakes are so high and when there seems to be so much controversy among people who are experts and (questions about) are these numbers right or are they wrong and when the negative outcomes clearly can damage an entire state and businesses and people, I’d think we’d want to use every opportunity to meet with every person that has a legitimate stake in this,” Harris said. “Go through these numbers in detail so when we get to the end of the day we are as sure as we can be that we are not going to end up like … Detroit or one of those places.”