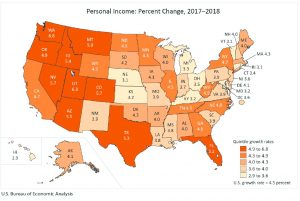 SPRINGFIELD — Personal income in Illinois grew 4.5 percent in 2018, which was more than any surrounding state but on par with the national average, the U.S. Bureau of Economic Analysis announced Tuesday.

That was good news for workers in the state, but it was also good news for state government, which relies on individual income taxes for nearly half of the $45 billion in revenue it takes in each year.

State budget officials said the 2018 growth rate was slightly higher than expected, but it was not enough to cause them to change their revenue forecast.

Most of the growth in Illinois was attributed to growth in “net earnings” — the amount of money workers take home after Social Security and Medicare taxes are deducted. That accounted for 2.5 percentage points in the 4.5 percent growth rate.

Illinois also recorded growth in certain kinds of “property income,” which includes dividends, interest and rental income. There was also growth in “transfer receipts,” which include retirement and medical benefits, mainly through Social Security, Medicare and Medicaid.

Broken down by industries, the professional, scientific and technical services sector contributed the most to Illinois’ overall growth rate, accounting for 0.57 percentage points. Other sources of growth included health care, transportation and warehousing, durable goods manufacturing and state and local government services.

There were slight declines in personal income derived from farming and business management.

Illinois also saw a more rapid growth rate in the fourth quarter of 2018, when personal income grew at an annualized rate of 4.9 percent. That, however, was not as robust as the national average of 5.2 percent. It also lagged behind all neighboring states except Kentucky.