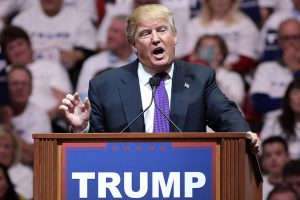 Donald Trump speaking with supporters at a campaign rally at the South Point Arena in Las Vegas, Nevada. (Photo by Gage Skidmore)

Like some other high-profile Illinois Republicans, U.S. Rep. Adam Kinzinger is still not sold on Donald Trump. But he says he’s coming around.

The GOP formally nominated Trump for president July 19 at its convention in Cleveland. Kinzinger, who represents the 16th Congressional District, was a delegate for Jeb Bush in the spring primary.

He said Trump isn’t his first choice, but primary voters in Illinois voted for the New York billionaire to represent them.

“This is probably number 15 or 16 on my list to be our standardbearer, but he won fair and square.”

Kinzinger said he has issues with Trump’s foreign policy experience but he’s coming around.

“I have concerns with his statements about Russia and statements about ISIS and things like that but I intend to get there. I think Hillary Clinton would be four more years of the last eight years of President Obama which, in my mind, hasn’t been good. Hopefully we’ll see a Donald Trump that’s reaching out to unify.”

The next president will have a prominent influence through appointments to the Supreme Court.

“There is no doubt that the next president will determine the leaning of the Supreme Court for a generation and, as a conservative, that’s very important to me,” he said.

A number of Illinois Republicans, including Gov. Bruce Rauner and U.S. Sen. Mark Kirk are not attending the convention. Kirk has openly opposed the presidential nominee, saying he will not vote for Trump, rather write in a vote for retired Army Gen. Colin Powell.