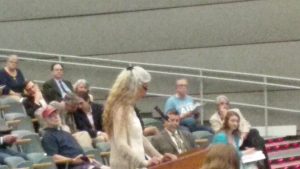 be used to improve air quality for Illinois residents)

Dennis Nelson has a simple plan for the money Illinois will receive as part of the Volkswagen settlement.

“Use the entire $108 million looking to impact the future,” the Chicago resident said. “Zone in on our environmental future.”

Nelson was one of more than 40 people who shared their opinions last week with Illinois Environmental Protection Agency officials about how to allocate that Volkswagen money.

Nelson was one in a parade of people who went to the microphone urging the IEPA to put more of the settlement funds into electric vehicle infrastructure.

The IEPA is in charge of $108 million in funds as part of a nationwide settlement over Volkswagen having “cheat equipment” on diesel vehicles that gave more positive emission output data than was factually correct during emissions testing.

Illinois is proposing to allocate 65 percent of the settlement funds in reimbursements for new locomotives, tug boats and other off-road, pollution-control efforts.

Sierra Club officials and other environmentalists have contended that Illinois should follow the lead of other Midwestern states that are allocating the maximum-allowed 15 percent of settlement funds for electric vehicle infrastructure. Under its current allocation plan, the IEPA has not allocated any money for EV infrastructure.

Such a plan does not sit well with Nelson, Sierra Club leaders and other environment proponents.

“The (IEPA) plan needs to be most reflective of long-term thinking,” Nelson said. “Electric is cleaner, healthier and will be the transportation of the future. Providing electric vehicle infrastructure will make electric cars more affordable for everybody.”

Limited mobility did not keep Rose Gomez from attending the May 30 IEPA public outreach session at the State of Illinois Building in Downtown Chicago. 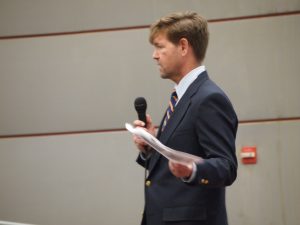 Brad Frost, community relations coordinator for the Illinois Environmental Protection Agency, talks during a public outreach meeting in Chicago about the possibility of the IEPA changing its draft plan of how to allocate Volkswagen settlement funds. (Kevin Beese/Chronicle Media)

“I am on crutches, but felt it was important to be here,” Gomez said. “It is of utmost importance that we improve air quality for families. We need to accelerate programs in the state to add projects like electric vehicles.”

She said going to electric cars, trains and buses would improve the health of children and adults with breathing issues.

Brad Frost, community relations coordinator for the IEPA, said that comments from the Chicago session, as well as earlier East St. Louis and Springfield public outreach sessions and the 1,600 comments made on an IEPA survey on the settlement, would be weighed and possibly used to tweak the allocation numbers.

“We are hear to get feedback on the draft plan,” Frost said at the start of the Chicago session.

He noted that Illinois’ $108 million allocation is part of a $15 billion nationwide settlement. Frost said the IEPA plan is aimed at having the biggest impact on reducing nitrogen oxide emissions.

“We anticipate three rounds of funding, allocating 80 percent of the money over 10 years,” Frost said.

He noted the vast majority of Volkswagen cars equipped with the cheater devices were located in the Chicago area so that will be taken into account when a scoring system is established for potential IEPA grant recipients.

As the IEPA allotment plan now stands, the money would be distributed thusly:

David Milligan, a concerned citizen, questioned why Illinois plans to allocate 65 percent of the VW funds for off-road efforts, which is in direct opposition to many other states that are allocating 65 percent of funds for on-road projects.

“Why the discrepancy?” Milligan asked.

Frost said those allotment numbers are just a guideline and will be dependent on the applications for funding that are submitted.