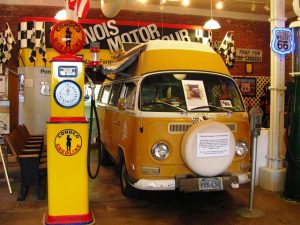 The Volkswagen van of late Route 66 travelling artist and cartographer Bob Waldmire, on whom the Cars character “Fillmore” is based. (Photo courtesy of Route 66 Hall of Fame)

The Illinois State Museum (ISM) announces its Route 66 collecting initiative focused on expanding the Museum’s holdings of related historic objects in preparation for an exhibition opening in 2026 celebrating the 100th anniversary of the Mother Road.

The museum seeks items that help illuminate Route 66’s history, both during its glory days before the interstate system and objects from those who continue to add to its story today.

Bob Waldmire’s family has donated a significant collection of his art and personal belongings to the Illinois State Museum to lay the foundation for the collecting initiative.

“Bob represented a sense of freedom and devil-may-care attitude to people who were more enmeshed in a routine,” said his brother, Edwin “Buz” Waldmire.

Perhaps there is no person more iconic to Route 66 than itinerant artist and peace activist nomad Bob Waldmire. Throughout the 1970s, ’80s and ’90s, Waldmire traveled from town to town along Route 66, creating and selling art and postcards. Then, in 1985, he bought a 1972 Volkswagen camper van that he lived out of in Arizona; this van was later the inspiration for the character Fillmore in the Disney-Pixar movie “Cars.”

The objects given to the museum speak to Bob’s prolific output as an artist and his free-spirited, nomadic lifestyle. This gift includes original drawings, paintings, prints, postcards, and a manual typewriter on which Bob composed his newsletters and correspondence.

Additionally, the donation includes a pair of patched, cutoff shorts he wore when traveling Route 66, a roadside display stand for selling postcards and the hood of his 1965 Mustang, hand-painted with a map of Route 66.

“It is an honor for the Museum to receive this donation of Bob Waldmire’s art and objects,” Illinois State Museum Curator of History Erika Holst said. “No one symbolized the freedom and opportunity of the Mother Road better than Bob Waldmire.”

Those interested in contributing to the ISM Route 66 collecting initiative can learn more about the items the Museum is looking to add its collection at bit.ly/ISMRoute66.