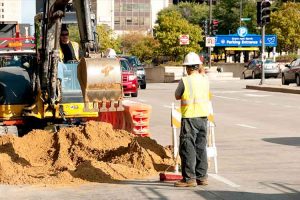 The issue is state funding for the repair and construction of roads, bridges and other transportation projects (including mass transit and airports) — all paid for from dedicated revenue sources. (Photo courtesy of Better Government Assoc.)

The Nov. 8 ballot will have a statewide referendum question whether state-collected fuel and automobile transfer tax funds should be constitutionally protected in a fiscal “lockbox” from raids by the Illinois General Assembly.

The so-called “Safe Roads Amendment” is definitely not as sexy to the Illinois voter as term limits, a millionaire tax, school finance reform or the Independent Map amendment — all of which were booted off the ballot.

At issue is state funding for the repair and construction of roads, bridges and other transportation projects (including mass transit and airports) — all paid for from dedicated revenue sources such as state taxes on fuel, license plate registration and vehicle transfers.

The problem is that the General Assembly has been known to “sweep” these road funds for extra revenue during economic crisis or to balance the budget.

Citizens to Protect Transportation Funding, amendment boosters, claim the state has diverted $6.8 billion from road repairs over the past 10 years.

“It’s because the politicians have used the Road Fund as a slush fund,” a pro-amendment pamphlet says.

“This strategy is akin to someone transferring money from their savings account to their checking account and claiming they made money,” wrote Bill Kramer, of Alexander, Va.-based Multistate Associates, a national consultant group for state governments. “But in tough fiscal times, state lawmakers will do what it takes to secure a ‘balanced budget.’”

State grants to local municipalities for road repairs were suspended in June to absorb the losses, delaying summer construction road projects across the state.

Meanwhile Illinois roads and bridges continue to deteriorate because of delayed maintenance and repair, said Todd Maisch, president and CEO of the Illinois Chamber of Commerce. Maisch also serves on the Transportation For Illinois Coalition.

“We simply can’t afford to siphon off intended revenues for other purposes because transportation is so important for our safety and the state economy,” Maisch said.

The Illinois Department of Transportation has closed or weight-limited about 3 percent of the bridges statewide categorizing them as in “critical condition” or “intolerable-high priority for replacement,” according to data from the ICC.

The U.S. Dept. of transportation, which uses different evaluation criteria, reports that 16 percent (about 4,200) of Illinois bridges are categorized as “structurally deficient or functionally obsolete.”

“We don’t want to wait for a bridge collapse to decide we need to put more money into repairing bridges,” Maisch said.

Bringing Illinois roads and transportation infrastructure back up to functionality is a project that would cost about $1.8 billion of state dollars per year, a TFIC report says on its website. The Metropolitan Planning Council estimates an investment of $43 billion is necessary to “rebuild and improve our state’s transportation network,” wrote Analyst James Riley.

Supporters of the transportation lockbox amendment including transportation unions, construction companies and agriculture interests, all say transportation money must be protected from lawmakers so these projects can move forward.

But some analysts warn that putting a constitutional block on access to the transportation state money pots will put the state in an even tighter bind. Already debt-service and constitutionally protected state pensions consume most of the state’s revenue dollars.

“From a public finance standpoint, [the lockbox] limits the state’s flexibility, in terms of emergency situations,” said Kent Redfield, professor emeritus of political science at University of Illinois Springfield. “I think some people would rather see [the sweeps of transportation funds] protected with a statute rather than a constitutional amendment.”

Redfield said congestion and growth in suburban areas have outpaced the state’s ability to pay for transportation infrastructure. More money has to come from somewhere.

Redfield said the Illinois state 19-cent-per-gallon gasoline tax has not generated enough money to keep up with transportation funding. The tax hasn’t been raised since the 1990s and generates even fewer dollars from fuel-efficient vehicles.

Shielding the state’s transportation dollars in a “lock box” won’t generate much more revenue, Redfield said, but when the Illinois budget crisis is finally resolved, the General Assembly will need to revamp the state revenue structure, and most likely boost the state gas tax. Analysts propose a state gasoline tax of up to 30 cents more per gallon, the Metropolitan Planning Council reports.

“It will make it easier to sell an increase in the gas tax if we’ve already locked it up in a constitutional amendment,” Redfield said.

The referendum requires a 60 percent “yes” vote to pass, or a majority “yes” vote from all people casting ballots overall Nov. 8.