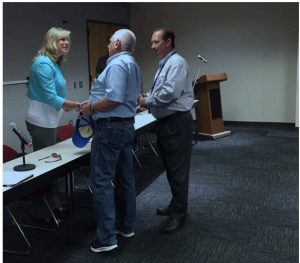 “Veterans carry suicide in our pockets, like a military challenge coin, ready to cash it in at a moment’s notice.”

These are the words shared by a U.S. Army veteran with members of an Illinois task force on veteran suicide this summer at one of several meetings around the state.

Democrat and Republican state legislators, veteran’s health professionals and an Army National Guard chaplain spent the summer meeting with veterans at community colleges statewide to ask what services were needed for service men and women that could help ease the stresses that lead to depression and despair.

“It’s the most horrible thing that someone who lives thru war, lives protecting our country, and comes home to the united states and finds the situation so hostile and nonresponsive and so unbearable that they believe they need to take their own life,” said Rep. Stephanie Kifowit (D-Oswego) at a press conference Dec. 1. Kifowit served in the U.S. Marines.

Veteran lawmakers were approached by U.S. Army veteran William Attig to help understand and fill the gaps in the transition veterans undergo when they return to civilian life. Help is needed at the state level, Attig said. Kifowit agreed, saying veterans sometimes fall through the cracks of federal programs without any follow-up at the state level.

Attig shared his own experiences with suicide among his fellow servicemen and women. His unit was among the “hardest hit” by suicide since Vietnam, he said.

“We lost our first member while we were in-country to suicide and it was just a continued problem as we go on,” Attig said. “We banded together as a group together to find ways we can give each other support.”

The task force released a 46-page report based on the ideas generated by veterans at the public meetings.

Fifteen percent of the 1,300 suicide victims reported in Illinois in 2014 were associated with the armed forces in some way, Attig said. But only one percent of Illinois residents are veterans, he said.

The report made 11 recommendations, and provided research studies and veteran resources already offered at the state and federal level.

The report recommended proactive outreach to vets from units with high levels of military conflict, since studies of veteran suicide by unit show combat violence is correlated with higher suicide rates.

Educational campaigns about PTSD and other mental health problems were recommended to help veterans get help sooner and break through social stigmas.

The report suggested giving additional training to frontline employees at veteran service organizations to help identify Veterans who might be at risk of suicidal thoughts.

University and other higher learning opportunities for veterans should be prioritized in the Illinois state budget, the report said. The report suggested establishing “an educational success program for veterans.”

Prior to discharge, the report recommended a program for family members, including parents, to increase awareness of the “emotional cycle of deployment.”

A therapy dog, or other therapy animal, licensing program should be developed by the state of Illinois, the report recommended.

A special transition program just for Illinois residents should be developed to improve the existing U.S. Govt. debriefing that some vets called, “Death by Power Point,” the report said.

A state program to help veterans organize all benefits, such as college tuition credits, upon discharge, by filing DD214 paperwork, should be developed.

A peer-to-peer program should be established statewide.

Kifowit said the report and recommendations were a starting point for new laws and programs that will help get services into place in Illinois.

“The best part about this program, when a vet comes home, there’s a lot of wariness with different government entities,” Attig said. “We can tell them the solutions we came up with for this program come from veterans themselves.”