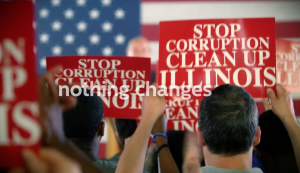 The Illinois Supreme Court voted Aug. 25 by 4-3 to keep a legislative redistricting reform referendum off the state ballot in the Nov. 8 election.

The divided court, voting along party lines, upheld a lower Cook County court ruling that the Independent Maps referendum question was unconstitutional and gave new roles and duties to the state Supreme Court and Illinois Auditor.

The majority of judges ruled that citizen amendments to the 1970 Illinois constitution are meant to change the duties and responsibilities of the General assembly only.

“The Illinois Supreme Court’s ruling is extremely disappointing to all of us,” said Independent Maps chair Dennis FitzSimons.

“To our bi-partisan coalition, to the more than 563,000 Illinois voters who signed petitions to put this important amendment on the ballot and to the many, many more Illinoisans eager for an opportunity to make the Illinois General Assembly more responsive to all of Illinois,” he said in a statement.

Democrats on the bench voted to uphold the referendum challenge brought by the People’s Map, a group of Chicago and suburban political and business figures. The challenge was argued by House Speaker Michael Madigan ally and Chicago attorney Michael Kaspar, who also knocked out a similar referendum initiative in 2014 for inadequate signatures. Madigan said in May through a spokesperson he had nothing to do with the challenge.

Republican Judge Robert Thomas wrote a strongly worded dissent calling the four supporting votes a “fait accompli” and “nothing less than a nullification of a critical component of the Illinois Constitution of 1970.”

“When the Reporter of Decisions sends out the party’s dispositions, he should include a bright orange warning sticker for readers to paste over … their personal copies of the 1970 constitution reading ‘Out of Service,’” Thomas wrote.

“Today’s court decision to deny Illinoisans the right to vote on a redistricting referendum does nothing to stem the outflow or change people’s views of how the system is rigged and corrupt,” the governor said in a statement. “When the General Assembly reconvenes this fall, they should put political reform — term limits and independent redistricting — at the top of the legislative agenda so that incumbents aren’t locked into power and democracy is restored through competitive general elections,” he said.

Every 10 years, the General Assembly redraws legislative maps based on population figures from the 10-year U.S. Census. The next redistricting will take place in 2021. Gerrymandered districts are determined by the party-in-power in Springfield. The Illinois Constitution rules for legislative districts are; they must be contiguous, compact and have equal population. Over the years, Democrats and Republicans in power have stretched and altered the districts to keep incumbents in power or sometimes even map legislators out of their own district. Democratic House Speaker Michael Madigan’s 20-year control of the mapping strengthens his power base, opponents and Republicans allege.

But legislators and others say district boundaries should do other things: for example, guarantee minority representation.

“If this effort was upheld, minority voters across the state would have had their voices and rights weakened by a misguided and dangerous effort that would have resulted in a loss of representation,” Hooker wrote. He gave as an example a purported proposal to draw legislative maps around municipal boundaries. “The backers of this initiative were attempting to minimize the number of districts in which minorities would have a voice,” Hooker wrote.

The Independent Maps group said they might appeal the decision, but “The Supreme Court rules give us the opportunity to seek rehearing and our legal team is weighing that option,” said FitzSimons. But the group seemed pessimistic. “In short, the system is broken and the way this court interprets the Constitution seems likely to prevent its repair,” FitzSimons said in a statement.