While much of the talk during the IFB Candidate Forum centered on farm and rural policy — with topics ranging from Environmental Protection Agency overreach to mandatory labeling of genetically modified foods — larger societal issues such as immigration reform and Duckworth’s commitment to receiving Syrian refugees in the U.S. took center stage.

Kirk, a Champaign native, was elected in 2010 to represent Illinois in the U.S. Senate after five terms representing the people of Illinois’ 10th District in the House of Representatives. Duckworth, from Hoffman Estates, was re-elected to represent Illinois’ 8th Congressional District in 2014 and was sworn in for her second term in January of 2015. The two will face off in the November 8 Senate election, with each espousing disparate visions on how to best move the country forward while serving the people of Illinois.

Here is a sampling of some of each candidate’s remarks, in order of their appearance at the forum stage: 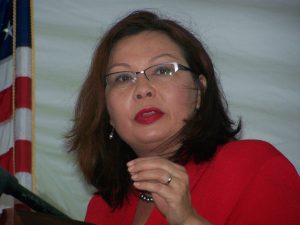 On immigration reform: “I am on the record as for supporting comprehensive immigration reform and I still support it. But we have to be practical, fair and humane. If you deport the parents of 2-year-old children that were born in the U.S., parents that are not documented, that is not humane.To build a 30-foot wall is not practical.”

On welcoming Syrian refugees: “As I’ve said before, my family has not served this country (in the military) and I did not bleed for this nation just to turn around and jeopardize our national security. Those refugees selected to come to the U.S. are largely families with no men of military age. They are widows and orphans. Those selected to begin the process of coming to the U.S. enter into a minimum 18-month-long vetting process involving the State Department and Homeland Security. They are not ‘there’ last week and ‘here’ this week, like it appears with those commercials. By turning our backs, we are feeding ISIS propaganda, growing the next generation of those who would shoot down American helicopters.”

On her commitment to agriculture: “Whether I am in the Congress or the U.S. Senate, I am committed to working to get Illinois farmers the resources you need to grow your businesses and to support your local economy. I will be an advocate for farmers. A nation that cannot feed itself cannot lead the world. When we invest in our farmers, we invest in our state and our nation.” 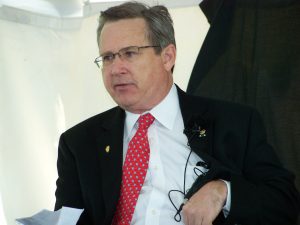 On Duckworth’s Syrian refugee policy: “Tammy Duckworth told you that all 200,000 Syrian refugees will be, quote, thoroughly vetted. She lied to you right here. When she lied to you, she knew that the FBI had already testified multiple times before Congress that there is no vetting that happens. We are unable to build a terrorist database on Syrians right in the middle of the Syrian civil war. The director of National Intelligence has said many times that there is no screening that we can do. She is trying to tell you that the Syrians coming into the U.S. are somehow different. They are all from Syria. I ask you not to suspend your common sense.”

On agricultural exports: “My (plan) is to make sure we dredge the Mississippi (River) so we can get the new Supermax ships to align with the new Panama Canal. The Panamax ships could load 12,000 truckloads of (products) but the new Supermax ships can double that volume. My goal is to dredge the lower Mississippi so we can (transport) both commodities of corn and soybeans and spread the wealth. With the globalization of the new Panama Canal, we expect a 35 cent (per bushel) raise in soybean prices.”

On trade with Cuba: “I’ve been against it. I think, you know, looking at the Castro brothers and what they’ve done to that poor country, there was a time when Cuba had the second-highest income in the western hemisphere. The government of Cuba has been a longtime provider of espionage against the United States. (Ana) Montes, a spy in the Defense Intelligence Agency, underscores the problem that we have. She would provide intelligence against the United States to Cuba, who would sell it to the Russians and made several hundred million dollars. I think that without the Castro brothers Cuba would be much better off.”

On his commitment to agriculture: “I have a few things to say about how pro-agriculture I am. Unlike Tammy Duckworth I am for TPA and TPP (Trans Pacific Partnership). In my case, I have voted many times against the WOTUS (Waters of the U.S.) decision, and have backed the ethanol industry big-time, plus the farm bill, especially crop insurance. In my case, I have voted against the new Vermont GM (genetically modified) labeling regulations. And (I am) unlike Tammy Duckworth, who was for the COOL (Country of Origin Labeling) regulations. I am a friend of agriculture, I am there for you and not for the big Chicago unions like my opponent.”