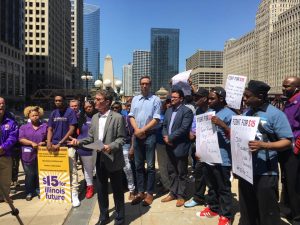 Proponents of the Fight for $15 minimum wage movement protest earlier this summer in Chicago. Lower wage workers were expected to gather in large numbers in Chicago over the Labor Day weekend to protest Gov. Bruce Rauner’s veto of Senate Bill 81.
(Photo courtesy of Fight for 15 Chicago)

Business owners and labor remain at odds over a proposed near doubling of the state’s minimum wage during the next five years.

Lower-wage workers were expected to turn out in force in Downtown Chicago on Labor Day to continue their fight for $15. Crowd estimates were unavailable as of press time.

Rauner, in his veto, said the numbers just don’t bear out any benefits to such an increase.

He pointed to a University of Washington study that showed workers actually lost money when Seattle increased its minimum wage to $13 per hour in 2016. He said because workers’ hours dropped by 9 percent due to the wage hike, they ultimately made $125 less per month after Seattle’s minimum wage increased.

“The most thorough study to date, published earlier this year by researchers at the University of Washington, found that for every 10-percent increase in the hourly earnings of low-wage workers, there was a 30-percent reduction in employers providing those jobs,” Rauner said. 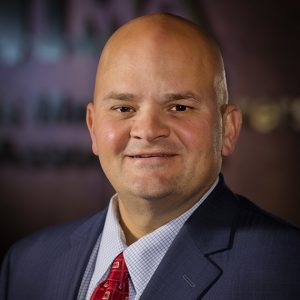 “It would have cut pay for low-wage workers” based on the Washington study, Denzler said in his tweet.

Pro-labor forces took the action as a slight and said it simply sets the stage for Rauner’s re-election bid in 2018.

“The time for a raise is now,” Greg Kelley, president of the Service Employees International Union, said in a statement. “If Governor Rauner won’t allow this to happen in Illinois, we will join with workers across the state to elect someone next November who will.”

Kelley noted that more than 2.3 million Illinois workers would have benefited from the senate bill.

“Governor Rauner showed us once again who he is and what his vision is for Illinois: a permanent low-wage economy, where services and infrastructure are slashed, where workers are deprived of dignity and rights, and where corporations call all the shots,” Kelley said.

Kelley countered Rauner’s claim that a minimum wage hike would hurt the state’s economy, saying that it would be an immediate boost to the economy and help give millions of Illinoisans a shot at entering the middle class. 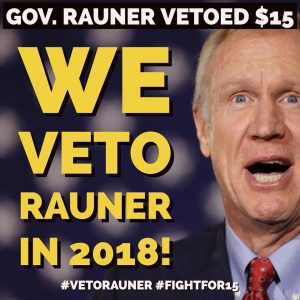 The Fight for 15 movement and other pro-labor groups promise to make the battle over Illinois’ minimum wage a top issue in the 2018 election. (Photo courtesy of Fight for 15 Chicago)

The SEIU president contends that individuals cannot survive on the state’s existing $8.25 per hour minimum wage.

“This is not even close to enough to get by, and the terrible effects are falling disproportionately on women and people of color,” Kelley said.

Grassroots Collaborative, a labor-community coalition representing thousands of Illinois low-income families, argues those families would have greatly benefited from the passage of SB 81.

“Governor Rauner has shown once against that he does not care about our communities and the pain Illinois families are experiencing,” Amisha Patel, executive director of Grassroots Collaborative, said in a statement. “Raising the wage floor in Illinois to $15 per hour would have created a pathway for 2.3 million Illinois workers to move their families out of poverty.

“After decades of cuts to vital services, education and infrastructure, Gov. Rauner is adding insult to injury for communities that continue to be abused by the governor and his wealth clique of political insider friends.”