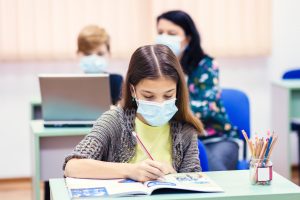 SPRINGFIELD – The COVID-19 pandemic resulted in significant drops in enrollment, academic performance and the likelihood of graduating high school on time, according to the latest school report card released recently by the Illinois State Board of Education.

The report card is an annual report that tracks how the state, and each school and district, are progressing on a wide range of educational goals.

But the report also showed that more Illinois students than ever are preparing for college and careers by taking dual credit, Advanced Placement and career and technical education, or CTE courses, while schools themselves are doing a better job of retaining veteran teachers.

“We have witnessed both tragedy and heroism in our schools over the past year,” State Superintendent of Education Dr. Carmen I. Ayala said in a statement. “Students and educators have lost so much and lived and learned through unthinkable obstacles, but loss is not the whole story. Illinois’ schools also stepped up the rigor of high school course work, ensured students still graduated and earned early college credit along the way.”

According to the report, which covers the 2020-2021 academic year, total enrollment in Pre-K-12 schools fell 3.6 percent from the prior year, or by about 70,000 students, to just under 1.89 million. State officials said recent trends would have predicted a 1.1 percent decline, meaning the additional 2.5 percent can be attributed to the pandemic.

The report also shows a disturbing increase in chronic absenteeism since the pandemic began. More than one in five students, or 22.8 percent, missed 10 percent or more of all school days in the year. That’s up from 13.4 percent in 2019, the most recent full pre-pandemic year. 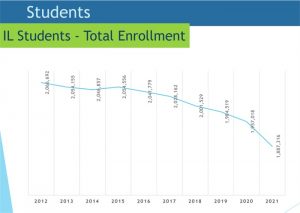 Student enrollment in Illinois fell by roughly 70,000 students, or 3.6 percent, in the 2020-2021 school year, largely due to the COVID-19 pandemic. (Credit: Illinois State Board of Education.)

The increase in absenteeism was especially notable among English learners, Black and Hispanic students.

Officials cautioned, however, that the 2021 figures might not be reliable because of the number of students who were engaged in remote learning, where taking accurate attendance counts can be more challenging.

“We know from national studies from the (U.S. Centers for Disease Control and Prevention) that school districts serving primarily Black and Hispanic students provided the least access to in-person learning last year,” Brenda Dixon, ISBE’s research and evaluation officer, said during a briefing on the report. “We suspect that less access to in-person learning contributed to lower engagement among Black and Hispanic students.”

The report card also showed declines in student performance on standardized tests, although those numbers are still preliminary because schools were given the option of administering those tests this fall due to the number of buildings that were still not fully open in the spring. Full results will be published next spring.

All students in grades 3-8 take what’s called the Illinois Assessment of Readiness, or IAR, which covers English language arts and math proficiency. High school students are tested in 11th grade by taking the SAT exam.

The rate of ninth-grade students who were on track to graduate dropped 5.1 percent from 2019, reflecting an increase in students receiving failing grades, ISBE said. Students are identified as on track if they have earned at least five full-year course credits and have received no more than one semester of an “F” grade in a core subject. 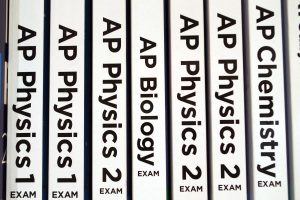 More Illinois students than ever are preparing for college and careers by taking dual credit, Advanced Placement and career and technical education, or CTE courses, according to the Illinois State Board of Education.

Agency officials said ninth-grade students who are on track are almost four times more likely to graduate than those who are not on track, and one of the most effective ways to increase graduation rates is through active, early intervention by identifying ninth-graders who are at risk and providing them with tutoring, additional instruction and other individualized services.

“The Illinois State Board of Education is encouraging schools to watch this cohort closely and to utilize federal pandemic relief funds for research-based interventions, especially for current ninth- and 10th-graders who are not on track for graduation,” Ayala said during the briefing. “We are also launching a $25 million high-impact tutoring program early this coming year to provide these types of individualized services to students across the education continuum.”

Ayala also noted that Illinois has received nearly $8 billion in federal pandemic relief funding to address the gaps that resulted from remote learning. Ninety percent of that money was paid directly to school districts that will decide locally how to spend it, but ISBE has earmarked the remaining 10 percent for things like bolstering special education services, closing the digital divide, and mental health services for students and educators.

One area of academic performance that did improve was in college and career preparation. The report card showed the number of students taking courses for both high school and college credit grew 12 percent from the prior year, to 72,490. Advanced Placement enrollment grew 1.6 percent, to 129,574, and CTE enrollment inched up a fraction of a percentage point to 287,191.

Officials attributed that to increased funding in recent years for programs that cover the cost of taking AP exams for low-income students as well as for CTE education overall.

The state’s overall teacher retention rate — the three-year average of the percentage of full-time teachers returning to the same school from the previous year — also rose more than a percentage point, to 87.1 percent, although retention rate was lower among Black teachers.