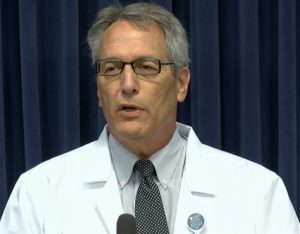 Paul Pedersen, president-elect of the Illinois State Medical Society, talks about the importance of raising the legal age for purchasing tobacco products to 21. “Our goal is to keep children safe from one of the leading causes of preventable death in the United States,” the Bloomington doctor said. (BlueRoomStream.com)

As a doctor, Paul Pedersen has seen how lung cancer ravages the body.

“I see the patients who are on ventilators for the long term because of their smoking,” the general internist in Bloomington said.

The president-elect of the Illinois State Medical Society said the importance of raising the legal age for purchasing tobacco to 21 couldn’t be overstated. Gov. Bruce Rauner vetoed the Tobacco 21 legislation, saying it would hurt cigarette sellers in border communities.

In his veto message, Rauner said that raising the minimum age for tobacco products in Illinois would simply send people to non-licensed vendors or neighboring states for their purchases.

“Smoking is detrimental to the health of Illinoisans of all ages,” Rauner said in his veto. “It is important that we address the issues caused by tobacco use, especially since many people begin using tobacco at a young age. Unfortunately, the legislation will inhibit the choice of consumes while also not helping keep tobacco products out of the hands of youth.”

Pedersen said Tobacco 21 does just that: keep tobacco products out of youths’ hands.

“Our goal is to keep children safe from one of the leading causes of death in the United States,” Pedersen said. “Illinois physicians believe that Tobacco 21 is an important public policy.”

Enacting the legislation was so important to state Senate President John Cullerton (D-Chicago) that he not only personally lobbied senators opposed to the bill, but he went over to lobby state House members and even called Rauner about the measure.

“So for the first time ever as governor, I called him,” Cullerton said at an Aug. 28 press conference, where he also said he would work to override the governor’s veto this fall.  “I talked to him. I explained to him what the bill did and I anticipated the opposition because I had heard the opposition and I explained to him that it was the tobacco lobbyists. I told him the tobacco lobbyists don’t like me and I’m very proud of that. I might be their biggest enemy in the United States — that’s fine with me.”

The Senate president said he told Rauner that the real intent of the legislation is to stop an 18-year-old from buying cigarettes “so that he or she could give (them) to a 14-, 15 or 16-year-olds. That’s why tobacco lobbyists are so much against the bill.” 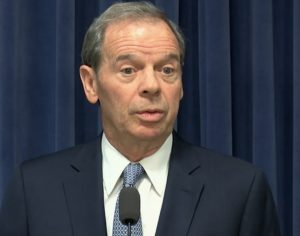 Senate President John Cullerton (D-Chicago), a proponent of raising the legal age for tobacco purchases in Illinois, said the real intent of the legislation is to keep 18-year-olds from buying cigarettes for 14-, 15- and 16-year-olds.

Kathy Drea, vice president of advocacy for the American Lung Association in Illinois, said that the governor did a disservice to Illinois youth by his veto.

“Governor Rauner failed the children of Illinois. Tobacco 21 is proven effective, contributing to a 36 percent decline in the use of tobacco products among teens in Chicago — just one year after passing Tobacco 21. Vetoing Tobacco 21 leaves our teens vulnerable to the disease and death associated with nicotine and tobacco use,” Drea said. “Ninety-five percent of smokers started before the age of 21 and one in five high school student use tobacco. Passing Tobacco 21 would not only protect our children, reduce smoking rates and save lives, but also save each Illinois family nearly $1,000 a year over time in state and federal tax burdens associated with tobacco-related healthcare costs.”

Currently Tobacco 21 laws cover more than 4.5 million people living in 26 municipalities in Illinois. Some of the largest cities in the state have passed the law, including Chicago, Aurora, Evanston and Naperville.