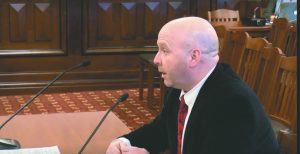 State Sen. Thomas Cullerton (D-Villa Park) talks with fellow senators March 12 during a hearing on his proposal that a commission be formed to examine consolidating Illinois school districts. (BlueRoomSteam.com)

The number of school districts in Illinois could be reduced by as much as 20 percent, under legislation pending in the state Senate.

State Sen. Tom Cullerton (D-Villa Park) has proposed creating a task force that would look at how to best reduce the 852 school districts in the state, including specific recommendations on which districts should have referendums on consolidation.

He said in his own district there is a school system with just 81 students.

“Nothing in this bill would want me or desire the ability to remove buildings, to remove mascots, but why superintendents couldn’t be shared, other things couldn’t be shared and brought together, to me seems a very simple fit, “ Cullerton said during a March 12 hearing on his legislation.

The legislation to create the School District Efficiency Commission made it out of the Senate Education Committee with unanimous approval.

Cullerton said he has sought the commission dating back to Gov. Pat Quinn’s time in office, but the time was never right because politicians don’t want to talk about school issues close to an election or the federal government was implementing mandates on the state education system.

“Every year it seems like there’s another hurdle to at least address and take a look at this issue,” the Villa Park senator said.

Cullerton believes lawmakers need to look at consolidating units of governments, in general.

“Whether the recommendations come back in a positive or negative way as long as we are taking a look and finding ways of saving money, I think that’s beneficial not only to ourselves but to residents and constituents we represent,” he said. 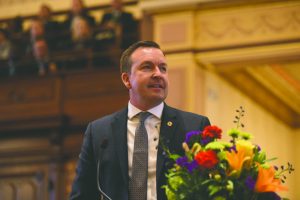 “Property taxes … are crushing residents,” Cullerton said March 13 during a press conference with the Transformation Illinois coalition to highlight legislation limiting the size, scope and cost of local government.  “The new school funding formula we passed two years ago will help us drive down taxes in our communities by funding schools the right way. The next step is evaluating redundant services at our educational system to eliminate the bureaucratic and outdated organization of school districts.”

The lawmaker said the proposed commission would tackle the size of districts, as well as cost savings and improved efficiencies that would occur with consolidation. He said in some cases distance may preclude the consolidation of districts despite potential cost savings.

Cullerton said he knows he will have a fight on his hands when it comes to eliminating school districts.

“Most local districts are not going to want to do anything,” Cullerton said. “… Anytime you start talking about pieces of people’s pie, they get very protective. So you’re going to find no matter how this hashes out, there are going to be people looking to say, ‘Don’t. Not in my back yard. Don’t touch my stuff. Don’t come after what I’ve got.’”