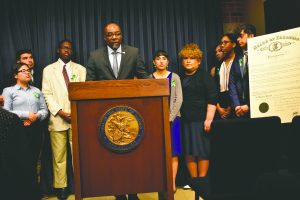 Attorney General Kwame Raoul speaks during a news conference Wednesday, May 15 at the Statehouse about the importance of trauma-informed awareness. He said the use of trauma-informed approaches to health care earlier in someone’s life can change health outcomes and even prevent someone from committing crimes as an adult. (Capitol News Illinois photo by Lindsey Salvatelli)

SPRINGFIELD — Trauma experienced as a child can reduce life expectancy by 20 years.

That was the finding of a 10-year study by the U.S. Centers for Disease Control and Prevention released a decade ago.

On May 15, state lawmakers marked the first Trauma-Informed Awareness Day by speaking about the importance of addressing adverse childhood experiences, or ACEs, that people carry with them through life.

“We have research that shows trauma impacts the brains of our children,” said state Rep. Karina Villa, D-West Chicago. “But the great news is with trauma-informed care, we can teach resiliency and we can make a difference in the future of our students.”

ACEs can range from physical, emotional or sexual abuse as a child to domestic violence in the home. They can also be experiences with racism or involvement with the foster care system.

They impact physical and mental health, and can lead to poor health as an adult. A person who has experienced eight or more ACEs is expected to live 20 fewer years than someone who has had none, the CDC study showed. 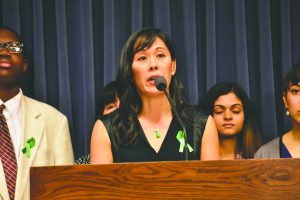 Grace Hou, secretary of Illinois Department of Human Services, said there are 3,000 children in Illinois who receive youth services and have been identified as having experienced trauma. She spoke during a news conference Wednesday, May 15 at the Capitol in Springfield. (Capitol News Illinois photo by Lindsey Salvatelli)

Senate Resolution 99, sponsored by Morrison and adopted March 21, aims to shift how short- and long-term trauma events are approached from a health care aspect.

Trauma-informed awareness is something Raoul said he’s advocated for in the past, but with a focus on criminal justice.

When Raoul worked as a Cook County prosecutor, he said it was common for someone who had originally come to his office as a victim to later be there for crimes they had committed.

He acknowledged that it didn’t need to happen.

“Had we appropriately invested in trauma-informed services, we would have interrupted that minor respondent from having come back into the building as somebody who committed a crime,” Raoul said.

A 2013 Illinois Behavioral Risk Factor Surveillance Survey reported that more than 60% of Illinois adults had at least one adverse childhood experience, while 14.2% of adults had experienced four or more.

Hou said the 3,000 children who receive Comprehensive Community-Based Youth Services from a collection of 30 organizations around the state are just a “small snapshot” of children who are served through youth services.

To undo the harm caused by trauma, Hou said, it’s important to approach trauma-informed care with “the best available science and practice,” but also as a statewide collaboration.

But, she said, Illinois youth must also be brought to the table to discuss trauma-informed care and wellness.

“It is so important that our programs designed for youth are designed with youth,” Hou said.