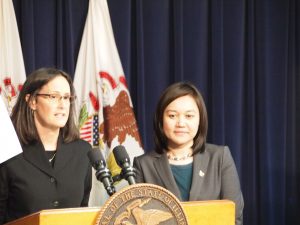 Illinois Attorney General Lisa Madigan talks about the federal lawsuit she filed against the bus company Suburban Express and its owner Dennis Toeppen. Madigan said her lawsuit “seeks to shut this company down for good” for discriminating against customers. Suburban Express provides transportation to and from the University of Illinois and five other Midwestern schools. Looking on is Tuyet Le of the Asian Americans Advancing Justice—Chicago. (Kevin Beese/Chronicle Media photo)

A bus company that transports college students has made some changes following legal action from the state’s top law enforcement officer.

Attorney General Lisa Madigan has filed a lawsuit in federal court alleging that Champaign-based Suburban Express and its owner Dennis Toeppen have discriminated against customers on the basis of race, national origin and religion, harassed customers with public shame and ridicule and intentionally compromised customers’ personal information.

According to Madigan’s complaint, Toeppen engaged in discrimination against customers, including a December mass-marketing email to customers that touted bus rides with, “Passengers like you. You won’t feel like you’re in China when you’re on our buses.”

“Suburban Express and Dennis Toeppen have engaged in illegal discrimination and harassment against college students and their families,” Madigan said. “I am asking the court to take immediate action to prevent further harm to people who have been targeted by Suburban Express and its owner, and my lawsuit seeks to shut this company down for good.”

Suburban Express is a company that provides bus service to students at University of Illinois Urbana-Champaign; Illinois State, Eastern, Indiana and Purdue universities; and the University of Iowa.

A Statement of Inclusion has been posted on the company’s U of I service page, stating, “All persons are welcome to ride Suburban Express. We do not discriminate on the basis of any individual’s race, color, sex, gender identity, religion, disability, national origin, ancestry, sexual orientation, marital status, parental status, military status or source of income. You are welcome here.”

That same Statement of Inclusion appears on the home page of Illini Shuttle, the company’s mini-bus service; and the “Order Online” page. 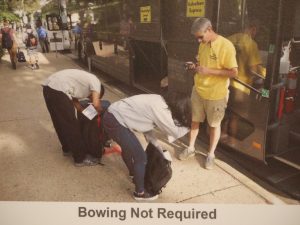 The poster board of a marketing piece distributed by Suburban Express. (Kevin Beese/Chronicle Media photo)

The Statement of Inclusion, however, does not appear on the home pages for service to and from the other five universities, although it does appear on the same “Order Online” page that all the sites have.

Toeppen could not be reached for comment as of press time regarding the allegations made in the lawsuit.

Tuyet Le with the Asian Americans Advancing Justice-Chicago said she was encouraged by the actions taken by Madigan.

She said she hoped the lawsuit against Toeppen “would put an end to his racist and illegal policies and practices.”

Le said she heard some of Toeppen’s alleged quotes for the first time at Madigan’s press conference last week and found them “egregious.”

“A bus company that advertises its racism has no place in serving the people of Illinois and by urging its employees to mock and discriminate against Asian students, Mr. Toeppen is fueling anti-immigrant sentiment growing in this country,” Le said. “Companies that are openly hostile toward people of different faiths, races or nationalities deserves to be put out of business.”

Madigan’s lawsuit also alleges Suburban Express encourages its employees to avoid certain students who appear not to speak English when distributing coupons for bus service. The lawsuit also alleges Toeppen posted a video mocking students at the University of Illinois, complaining that English is not the primary language spoken in one of the undergraduate residence halls offensively imitating an Asian accent. 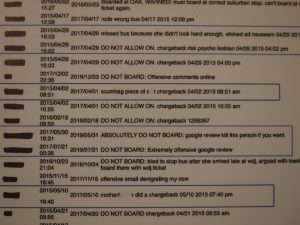 A partial list of the reasons customers were put on the Suburban Express Page of Shame. The page had been removed from the company’s website as of Friday. (Kevin Beese/Chronicle Media photo)

According to Madigan’s complaint, Toeppen goes to extreme lengths to ban and publicly shame or embarrass customers who have posted negative online reviews, mistakenly tried to use the wrong bus ticket or offended Toeppen in other ways. The Illinois attorney general said Toeppen responds to negative online reviews by ridiculing and insulting customers, sometimes encouraging potential employers to avoid hiring them or universities not to accept them. Toeppen also publishes web pages attacking individual customers and has published full credit card numbers, bank account numbers and other personal information, Madigan said.

No such pages could still be found on the Suburban Express website as of Friday.

Along with her lawsuit, Madigan also filed a motion for a temporary restraining order, asking the federal court to take immediate action to force the owner of Suburban Express to stop publishing customers’ personal information, stop harassment toward customers, and stop forcing them to accept unfair contract terms.