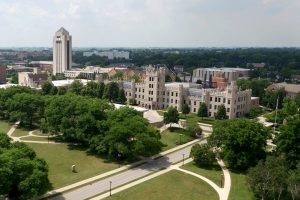 A lawsuit alleges the Northern Illinois University board of directors misled the public on the termination of NIU President Douglas D. Baker.

The plaintiff in a lawsuit in DeKalb County circuit court, accusing the Northern Illinois University board of directors of violating the state’s Open Meetings Act, now says the board intentionally misled the public about the details of an agenda item.

During that June 15 meeting, seven hours of which was spent in closed session, the NIU board approved a settlement agreement with former NIU President Douglas D. Baker totaling nearly $600,000.

DeKalb resident Misty Haji-Sheikh, who filed the lawsuit June 27, filed a motion for summary judgment Sept. 22. She contends that by failing to provide the required public notice for its June 15 meeting, by not providing a full description of the agenda item, and by making a required performance review of the president publicly available, the NIU board deprived the public of knowledge of and commenting on the severance agreement between the university and Baker.

Haji-Sheikh also contends that the NIU board violated a new state law that requires state universities to consider the performance review in any employment compensation, and to make that review available to the public on the university website at least 48 hours prior to the board approving “a bonus, incentive-based compensation, raise or severance agreement for the president or all chancellors of the university.”

Haji-Sheikh’s suit says the NIU board did not receive an executive summary of Baker’s 2017 performance evaluation until more than two weeks after the decision on Baker’s separation from the school, and that the public was not given access to that evaluation until that time.

As a consequence, Haji-Sheikh said, “members of the public could not offer comment on the matter, because Northern Illinois University had not disclosed what was being considered, and arranged and conducted the meeting so as to prevent any opportunity for public comment.”

Among the details not discussed in public were the facts that under the severance agreement, Baker was to be paid an additional year of his $450,000 annual salary, a lump sum payment of $137,500 and “up to $30,000 for unpaid expenses and legal fees.”

Haji-Sheikh says that after that June 15 closed session, NIU board chairman John Butler displayed a summary of Baker’s severance agreement on a screen and read it aloud. Following that three-minute presentation Butler asked for an immediate vote on the proposed agreement. No board members spoke before voting unanimously to approve the severance agreement, and no one from the public spoke.

“Indeed, the board’s conduct strongly suggests that the board intended to and took steps to vote on the severance agreement without any input whatsoever from the public.”

Haji-Sheikh said that at a subsequent meeting June 28 to appoint Baker’s interim replacement, Chairman Butler admitted that “for about three weeks the board has been focused primarily on the transition of the presidency.” Yet despite knowing before the June 15 meeting that Baker was going to resign, she argued, the agenda item associated with that resignation and severance agreement, “in no way reflected the board’s understanding of the action it anticipated taking.”

Haji-Sheikh noted that it has been the NIU board’s practice to address open session agenda items prior to going into closed session. But in what she termed “a stark departure from past practice,” open board discussion of Item 13 on the agenda, “Presidential Employment,” was conducted only after the seven-hour closed session. Haji-Sheikh called that terminology “vague, misleading and incomplete.”

“… anyone reviewing Item 13 would reasonably conclude that summary approval of Dr. Baker’s continued employment was on the agenda.”

Baker, a former business professor and administrator who became NIU’s 12th president in July, 2013 had been a controversial figure. The university’s Governor’s Office of Executive Inspector General (OEIG) began an investigation into the allegations in 2015. It forwarded the report to the NIU board on Aug. 23, 2016, but the report wasn’t released to the public until May 31, 2017, when the Executive Ethics Commission did so.

That report found that Baker and three administrators under him had allegedly run afoul of ethics rules in 2013 and 2014 when they hired consultants using the wrong classifications, retained them on staff too long and paying them more money than allowed under contract rules.

Baker addressed the OEIG report in a May 31, 2017 commentary on the university’s website. He said his use of outside consultants was necessitated by upheaval from an investigation into alleged misconduct within the university police department by an array of federal and state agencies. Baker said that in the wake of that investigation, the executive vice president and chief of operations in the former Division of Finance and Facilities had taken a leave of absence.

Baker said that administrative void occurred at a time when the university was dealing with “significant strategic, structural and financial challenges related to student recruitment and retention, state support of public higher education and pension obligations.”

Given the circumstances, Baker said, “there was a need to quickly engage outside experts skilled in culture change and financial management for an unbiased and comprehensive assessment.”

Baker said that when the OEIG approached his office with concerns over the consultants, he worked with the board to address this concerns.

While saying he “took responsibility for the mistakes identified,” and vowed to work with the board, Baker flatly refuted allegations that he sought to circumvent any rules. Saying that the OEIG found that “there were no violations of the state’s Ethics Act,” Baker said, “I disagree with any implications that there was intent to circumvent NIU’s guidelines or state regulations.”

Besides asking for attorneys’ fees, Haji-Sheikh is asking the court to formally find that the NIU board violated the Open Meetings Act, declare the separation agreement with Baker null and void, and “enjoin NIU from future violations of the OMA …”

The next hearing on the case before Judge Bradley J. Waller is scheduled for 1:30 p.m. Nov. 22 in Sycamore.