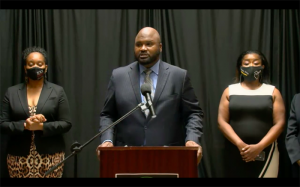 SPRINGFIELD — The Illinois Legislative Black Caucus released its agenda of “sweeping reforms” meant to address systemic racism in the state at a news conference Tuesday, Sept. 1.

State Senate Majority Leader and ILBC Chair Kimberly Lightford opened her remarks at the news conference by noting, “This is the moment that I have dreamed of, that I have prayed for, that I have worked towards my entire life.”

The news conference focused on the first pillar as the ILBC emphasized a need for ending mass incarceration, enacting police reform and strategically investing and redirecting state funding to reduce violence in Illinois communities.

“We respect, admire and honor our officers. But legislatively, we must address bad actors and racism in law enforcement,” Rep. Justin Slaughter, D-Chicago, said. “Here in [Chicago], Blacks make up 75 percent of the CPD shootings, 30 percent of the population — come on now.”

The news conference was held at the Westside Justice Center, a Chicago-based legal-aid clinic that provides legal assistance to low-income and underserved communities in the city. Three speakers from the Center shared testimony of systemic racism in Illinois.

Brendan Shiller, civil rights attorney and founder of the Justice Center, was one of those speakers.

“This city had more than 500 murders before September… We have a flood of pain coming to our communities over the next several months and couple years,” he said. “We know how to stop the flood, we know how to stop crime and violence. It’s education, it’s health care, it’s housing, it’s mental health, it’s jobs, it’s youth recreation — this ain’t a secret!”

According to Shiller, after Chicago had 771 recorded murders in 2016 — the most since 1996 — a sizable investment into youth employment that created 40,000 more jobs in 2017 led to decreased crime the following three years.

Lightford also announced a series of hearings to discuss each pillar of the ILBC agenda that would continue until lawmakers return for the fall veto session.

The first such hearing took place shortly after the news conference Sept. 1, with the Senate Criminal Law and Special Committee on Public Safety holding a joint hearing on police training and the use of force.

The hearing stretched beyond three hours and was at times contentious.

Discussion regarding punishment for officers who violate use-of-force standards and ending qualified immunity were tabled for later hearings so that training, hiring and accountability practices would remain the focus of the hearing.

Individuals from the American Civil Liberties Union and the University of Illinois at Chicago gave conflicting testimony to that of the International Association of Chiefs of Police in regard to appropriate use of force and racism and white supremacy infiltrating and affecting police departments.

They also disagreed on the degree to which the “Blue Wall” — an alleged phenomenon where officers will not report other officers who have broken the law or engaged in gross misconduct — is a problem in law enforcement.

All parties agreed on the need for more data, with many noting it is problematic that reporting on use-of-force varies for each department and jurisdiction. Both law enforcement representatives and police-reform activists requested that universal standards for reporting use-of-force be codified into law, as well as making enforcement data more accessible for study by public institutions and legislative bodies.

“We must prioritize transparency, and believe me folks, I have looked for the research, looked for the data. A lot of it simply is not there because we have not demanded and required that police departments throughout this state issue that data and submit those reports,” Slaughter said at the news conference prior to the hearing.

While none of the pillars of the agenda have been filed as legislation yet, Lightford said bills would be ready for the fall legislative session.

“We will have our legislative initiatives prepared for the veto session and we do intend on taking up all of veto session to address them,” she said.

The legislative leaders of the Democratic party issued statements backing the ILBC.

“The Black Caucus is showing us the path to a better Illinois. I look forward to being an ally and helping win approval of needed reforms,” Senate President Don Harmon said in a news release.

House Speaker Michael Madigan, D-Chicago, issued a statement thanking the Black Caucus for advancing “difficult but necessary discussions” and pledging to work closely with the members of the caucus.

“We are at a turning point, and it’s past time to take action. We know there isn’t one single source that has contributed to issues of inequality in our country and our state,” Madigan said in the statement. “We must evaluate all of our institutions to finally bring about the change that will make a difference. We must revisit issues with our criminal justice system, policing tactics, education system, workforce and economic opportunities and access to healthcare, among others, to bring about equity in the lives of Black Illinoisans.”